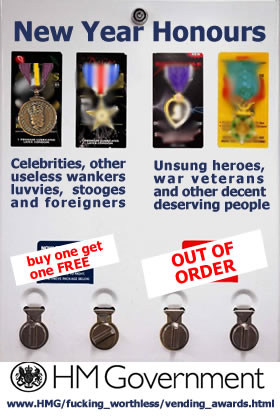 may i just say that you are awesome.
(

Well that's all jolly spiffing then :)
(

Yeah, where the fuck was Tony Hart's?
(

i only just saw this

great stuff, although you have to admit kylie has got a lovely bum which really does deserve its medal.
(

Kylie's medal was for services to music

Now if only we can persuade Simon Cowell not to release any records for a year...
(

serving in Afghanistan and I believe Iraq are being denied the more prestigious honours, despite being more than deserving of them.
This is as the Armed Forces can't be made to look overstretched. If a TA fellow gets the Victoria Cross two things will be said:
1. Bloody well done.
2. What are the TA doing being put in a position whereby they're up against such intense opposition that a Victoria Cross is even possible?

I know a guy in the TA, came back from Afghanistan not too long ago, there was a guy who (sadly I can't remember the honours), but he got awarded one far beneath his actions. The problem in this country is a culture of the military not being allowed to condemn the government. The Iraq war was the first time in a very long while that it has happened. I think the Armed Forces should come out and say "Hey, what about us?"

Don't even get me started on the funding cuts.
(Frozen_Banana Shaved against the grain; thoroughly unrewarding., Sun 30 Dec 2007, 16:59, archived)