The finalists for Shed of the Year 2013 announced I made this!
From boat shaped dens to replicas of the Tardis, the humble garden shed, once a place to store tools has taken on new purpose and shape as the finalists of the 2013 Shed of the Year competition sponsored by Cuprinol are revealed.

Now in its seventh year, the competition which invites ‘sheddies’ up and down the country to enter their whacky and wonderful shed creations for a chance to be crowned ‘Shed of the Year’, has received 1,975 entries.

The search for the nation’s best shed has been whittled down to just eight by almost 14,000 public votes on www.readersheds.co.uk, as one lucky shed has been voted category winner in each of the eight categories. 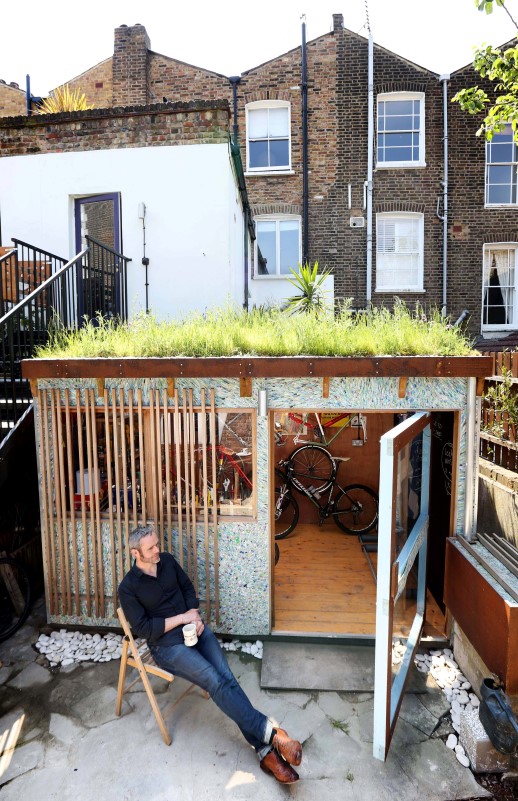 Sheddie Jonathan Sullivan of Modbury, Devon has been awarded a place in the final for his beautifully built Nest Design Studio. Positioned overlooking stunning views of Dartmoor, Sullivan uses the light and warm space as a place to work from. This quirky and industrial style cabin owned by Abigail Walker of Pangbourne in Berkshire has drawn influence from a Nissen hut. Combined with her love of vintage style and all things mid-century, this corrugated steel den is fully insulated and lined with an airy feel. 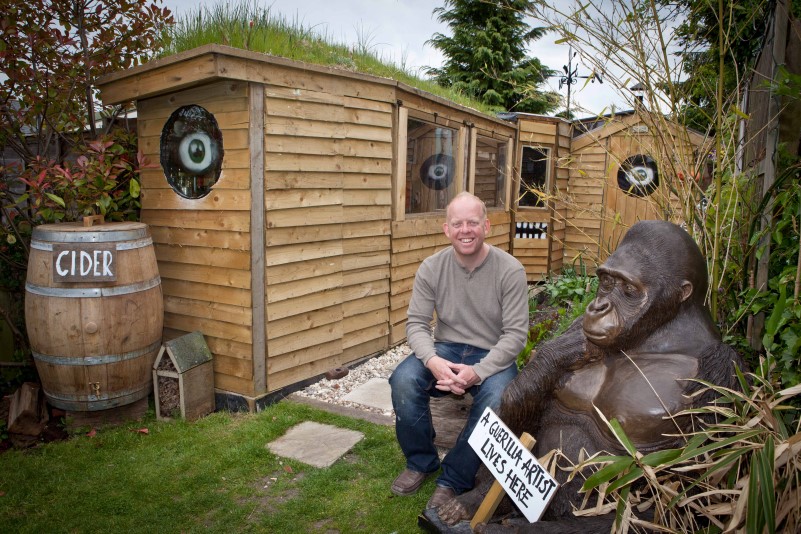 Retired Guerilla artist Luke Hollingworth, otherwise known as ‘Syd’, from Malmesbury in Wiltshire was a finalist in last year’s competition and has resubmitted his new and improved Stencil Shed after working solidly on it over the past year. His whacky creation is used as a space to house his art work and features a smiley face optical illusion, a cider bar as well as a full sized gorilla that guards the entrance! This creative and unusual shed owned by Alex Holland has a roof that consists of an upturned boat. Positioned in the Cambrian Mountain range near Machynlleth, mid-Wales, the shed houses a refrigerator, gas cooker, sink and sound system well used for parties. 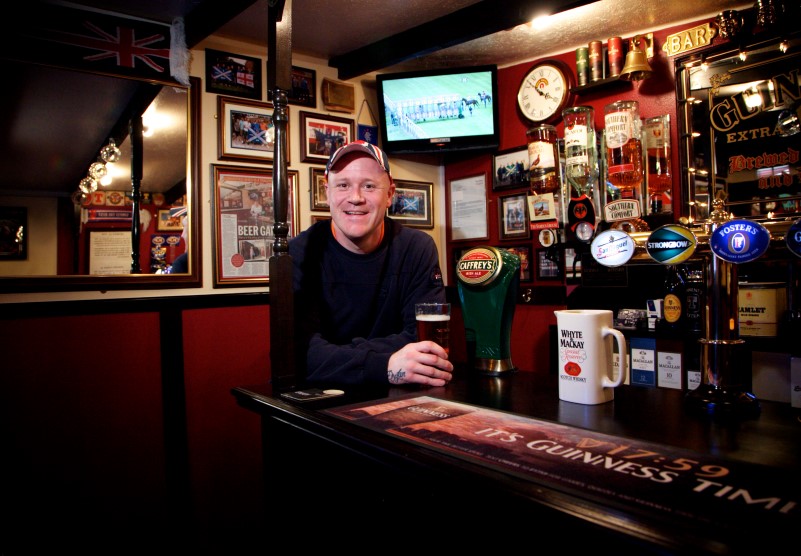 3 Steps Bar owned by Garry Logan of Ayrshire looks like a normal shed from the outside until you step inside. Having spent a fortune, the pub shed is complete with pub paraphernalia including a brass footrest, a last orders bell, a fruit machine, dartboard, sound system, optics, sky sports and wi-fi. 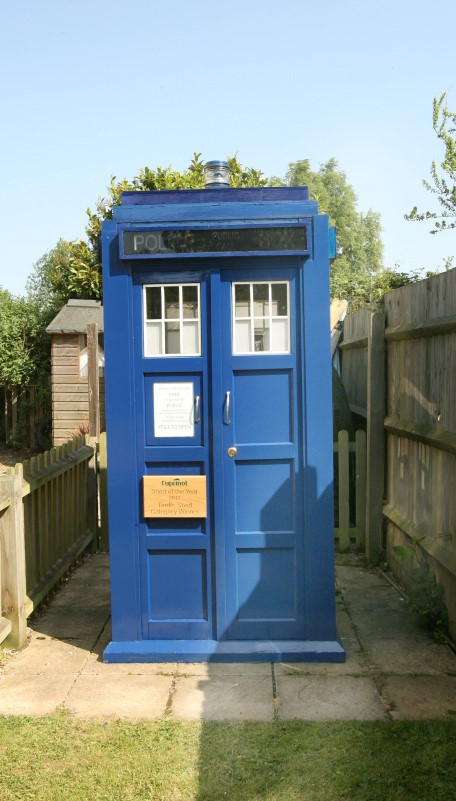 This replica of the Tardis from the popular sci-fi TV series is owned by talented sheddie David Lifton from Chelmsford. Built for his Doctor Who mad son Rhys, the slightly scaled down version of the original took five months to create. 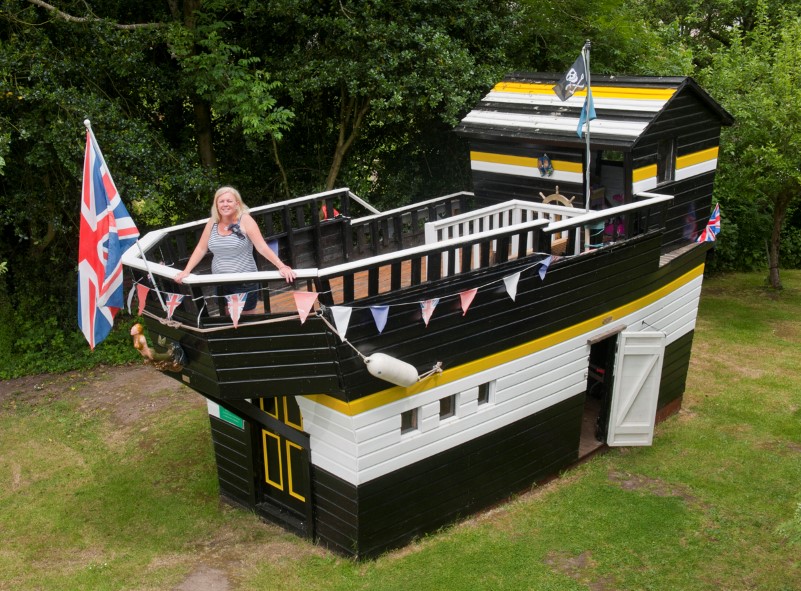 Winner of the Normal Shed category is the Queen Emma Galleon, a boat shaped shed modeled on the HMS Victory and the HMS Warrior. Owned by Southampton based Clare Kapma-Saunders, the impressive creation is complete with a top deck, rigging, skull and cross bones, hammock and captains quarters.

Many thanks to all the sheddies that have taken part this year - you are an inspiration to the rest of us.
(

Too late to enter my £99 steel shed from Argos which leaks then?

Anyone building sheds in shape of sheds anymore?

But people do want something different down their garden if they can..

Gosh
Some impressive labors of love there alright
(

how can that possibly be classed as a "normal shed?"
great sheds
(

I feel bad for bitching as there's some nice stuff there...
But these days it mainly just seems to be a competition find the winner of "who can physically throw the most money at their garden".
(dieselmonkey, Thu 13 Jun 2013, 13:33, Reply)

a lot of them use recycled stuff and have been a labour of love over many many years.

I will try and get some stats on the money spent if you want :)
(

I'ld like to build my own from scratch.
Know of any good plans for a basic one?
(

I think the boat roofed one is lovely.

always pleasant to see, thanks = )