Captain Placid asks: What annoying things do significant others, workmates and other people in general do that drive you up the wall? Do you want to kill your other half over their obsessive fridge magnet collection? Driven to distraction over your manager's continued use of Comic Sans (The Font of Champions)? Tell us.

"Baby/Child on Board" signs in cars.
I'm not sure whether I find these offensively patronising or offensively presumptive. Perhaps a bit of both.

Patronising: People who put these in their cars seem to think that I would treat their vehicle with greater respect than I would a car containing only adults. But of course! I'm much more likely to try to crash into a car full of grown-ups because adults are rubbish and don't deserve to live as much. And better yet, I'll make sure that if I do crash into a driver and their offspring, I'll do it more gently than I would otherwise.

Presumptive: Sign bearers appear to think I care about the welfare of their ill-begotten, snotty spawn. I understand that parents think their child is the most precious and valuable creature in the world, and a conveniently mobile package of the genes they wish to disseminate, but I fail to understand why they assume that I should think the same. It's only going to grow up to be as repulsive as its inconsiderate parents, who often seem utterly unable to indicate correctly.

Do these signs make other road pricks any less moronic or less likely to tailgate the baby-laden vehicles? I doubt they have a positive effect.

Personally, I'm interested in making the right judgements and not killing people or crashing when I drive; I'm not interested in knowing whether someone has successfully bred.
(

They were originally designed to inform the emergency services that there could be a smaller body in the mangled wreckage they were extinguishing.
but seem to have been commandeered by the type of person you describe so well.
(FartThroughAWalkieTalkie wished you were dead in ditch on, Sun 7 Oct 2012, 21:31, closed)

In that case there ought to be 'midget\dwarf\anorexic on board' signs too :)

Surely the legal requirement to use child seats
has rendered them redundant.
(lolwhites, Mon 8 Oct 2012, 21:04, closed) 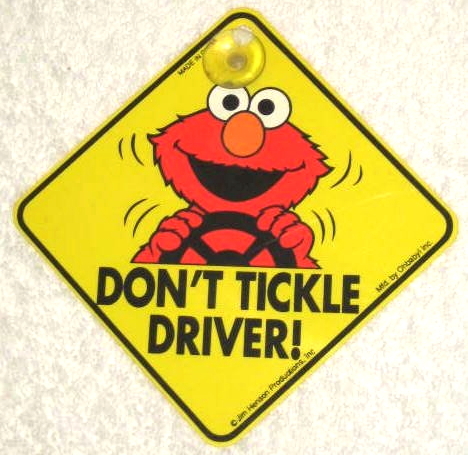 "Baby on Board" = Self-satisfied prat at the wheel
and "National Trust Member" = Half-blind dodderer with no road sense at the wheel (see also: Kirkcudbright)
(ubergeekian, Sun 7 Oct 2012, 21:51, closed)

what about 'princess on board?'

"Drama Princess on board."
That way the fireys know not to take the screams of pain too seriously.
(Misery McUglywife an attention seeking sociopathic fuckstain., Sun 7 Oct 2012, 21:59, closed)

Fast road outside Althorp - you are deeply missed. 4eva in r hartz xx
(

That's a bit much - they already got his mum.
(

The national trust member one
is so you don't get charged for parking at National Trust places.
(username failed moderation, Mon 8 Oct 2012, 11:06, closed)

Alternatively..
You could consider it as a thoughtful warning that the vehicle contains a sleep deprived, distracted disaster on wheels.
Good of them to warn that you should avoid / overtake at the first opportunity!
(BeatsWork, Sun 7 Oct 2012, 23:43, closed)

What we're all forgetting is the 1st generation of those nauseating signs said 'BACK OFF! Baby on Board' which was aggressively presumptive.

That they've dropped the 'BACK OFF' bit is progress, I suppose.

Did some enterprising outfit start selling signs with 'I don't give a fuck what you've got on board', or was that another one of my own brilliant ideas I failed to follow up?
(J H Christ began in Afrika ka ka ka ka, Mon 8 Oct 2012, 0:49, closed)

We only ever put it up when there was a kid in the car
and only then on the window next to them (rather than in the back window). Given my Dad's previous penchant for tailgating, it was a worthwhile precaution in case Trumpton did end up dragging us out.
( 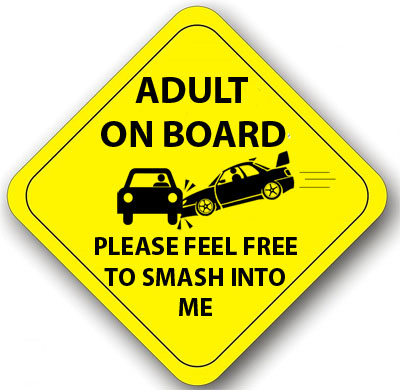 I thought that they were
to enable you to park in the mother, sorry Parent and child spaces at the supermarket. So that when the parking attendant walks past your car without any otherwise revealing indicators (such as a child seat) they won't book you.
(karnuvap, Mon 8 Oct 2012, 14:50, closed)

Why is it that we are supposed to take notice of these signs
but the fuckwit parents still talk on their mobiles while driving their brats around?
(Tont, Mon 8 Oct 2012, 23:05, closed)