First rude thing I ever saw

Our Ginger Fuhrer's young life was scarred by the discovery of an end-of-the-pier 'What The Butler Saw' machine and a jazz mag shoved behind a toilet cistern. Tell us about the first time you realised that there was more to life than sweet shops and Friday night TV

When I was about 7 and my older neighbour showed me this... 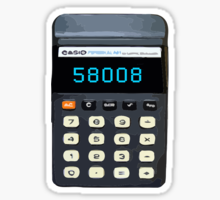 What if we had two calculators and we put them next to each other?
(

It's too early
I was mixing up fake phone numbers with calculator words.

It spells PISS OFF if you write your sevens with that little line through them, the way I do.
(

I can still remember this one more clearly than most of my maths lessons:
There was a girl who was 13 and had a size 84 chest but wanted a size 45 chest. So she went to the doctor who said 0 just take these pills 2 times a day (13844502) but instead took them *4 a day and ended up: