Freddie Woo says: "A bloke who lived next door to my mum told me on the day Diana died that it was 'God's punishment for sleeping with an Arab'". Tell us stories of bigots, racists, sexists, homophobes and loud-mouths so that we may point and laugh

I've been on the receiving end of rants issued by people who are intolerant of any opinion but their own,
Unfortunately their cause was so 'right on' that to question their opinion was to mortally offend them. Plus they had the unassailable advantage of being late teens so 'knew it all'.

A mate of mine back home managed to pull a girlfriend at the technical college and we were invited to meet up. As per Spimf's earlier post, you knew that she was a vegan because she told you almost the moment she was introduced, and was touchy and defensive about the subject- therefore we kept the chatter strictly neutral, except that I mentioned trainers (I had Hi-Tops which were par for the course in 1990) and that kicked her off, as she spat that she would never wear trainers made from leather, much as she would not let the flesh of dead animals pass her lips. "SEE?" She indicated, "...my trainers are only made from synthetics and plastic".

A little annoyed at this full-on right-on-ness I snapped back that would she be happy if a Gaea worshipper pointed out that oil was raping the body of the mother earth and polluting it, how would she react? Moody sullen silence.

Met her again at a mate's wedding quite a few years later and she had completely gotten over herself and was indeed a pleasant person to be around. Ah, Youth.

About 6 months later I was at Polytechnic in London, on my way to the Freshers' Fair, thinking to perhaps join the Film Society or the Keith Chegwin Appreciation Society (trufax).

On the way there out of the tube station I was accosted by a small dumpy girl with bad dreads, rubbish tie-dye skirt and ethnic jewellery collection of piercings. Behind her was the standard issue Trestle Table sporting the Socialist Worker bunting and a lot of copies of their paper.

'Are you political?' she demanded to know of me in a hectoring, over loud challenge. 'Uh, not really' I replied honestly. 'WHY? DON'T YOU CARE ABOUT WHAT GEORGE BUSH IS DOING IN KUWAIT MURDERING BABIES AND ALL FOR OIL?'.

OK. To elicit my support for a good cause is not always difficult but she's going about it exactly the wrong way. Disengaging, I turned away to walk on, tossing the parting shot over my shoulder 'Well we can't let Saddam do what he wants either.'

Jesus, she made Millie Tant of Viz fame seem quite mild mannered by comparison. Shouting and screaming down the road after me, about how I was capitalist scum that was responsible for all the evil in the world etc etc'.

Oddly enough when I got to the Fresher's Fair, all the political societies were there in force. The very loucheness of the Young Conservatives amused me but I wasn't about to join. I did acquire one of their Thatcher Blue 'Smiley' badges to wear on my lapel as a kind of visual clue to any further loony lefty recruiters that I wasn't interested.

(This alongside my other collection of badges by the way, Eddie the 'ead from Iron Maiden, Anti-Section 28, some 2000AD characters all sat on my denim blazer embroidered with band logos, purple paisley shirt, skintight black jeans, studded belt and cowboy boots and a rather rubbish mullet. I did NOT look like a Young Conservative poster boy.)
( 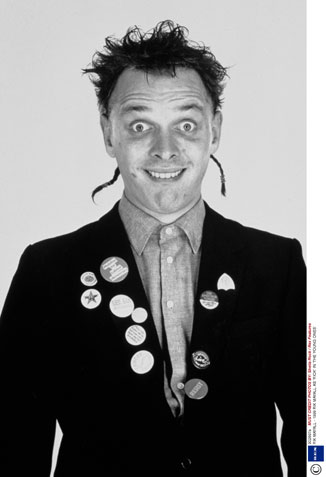 Alas, less good at being the People's Poet.
but as spotty. I think these people misunderstand 'living away from home for the first time is for FUN, not for LOLitics'.
(

I have it on the very best authority (i.e. mine)
that most right on student women will have proper filthy angry sex if you wind them up properly.
(

Don't care what their issues are as long as they let me bum them.

Best of all the bummings.

if I recall the silent East European TV series imported from the 1950s but shown to us in the 1970s
The Bumming Thrumming Tree.
(

I did wonder what baby oil was made out of.
The clue's in the name, now I come to think about it :(
(

Them uni types sure can get riled up. Ah, my days as a freshman in the socialist club. Really opened my eyes to the odd kinds of people with leftist leanings and the shameful effectivity of ad hominem. Gotta appreciate their tenacity though. Always chuckled whenever I saw a new group of freshers handing out leaflets.
(Avnas dosh!, Wed 27 Feb 2013, 9:24, closed)

I like how folk who sell the Socialist Worker are not usually workers themselves, and about 50 years too young to be socialists.

Most of the Socialists* I know are approaching retirement age,
but I didn't realise that there was a minimum age.

They may not be workers in fact
but because of their devotion to the cause, they are workers in spirit. And they do this because their fellow comrades are too busy working for The Man to effectively organise their protests. Or summat. Viva the power, up the revolution, bring down the goverments and reclaim the nation's wealth from the greedy and avaricious so that the poor can hold their heads up with dignity while they work a Tasco checkout.
(