...didn't this nicked pic originate from teh b3ta board? 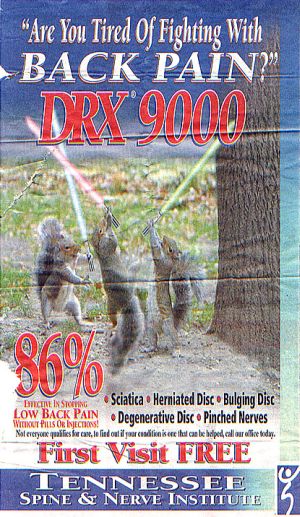 Can't remember who did it though.
(

...unless I had the same dream as you.

Was it Butters or Happy Toast?

Edit: Wasn't either of them

Was it too big before it was stolen?
(

To be honest, when it was posted on b3ta a couple of weeks ago I thought i'd seen it before then
(

you had, the original poster had done it a while back before then

he/she was reposting it for a compo. I think
(

yes, by a long time user I believe,

v thats the fella down there v
(

And a cracker it is too. I suppose it's flattering, 'cos I saw it on an ad blog which had several very complimentary comments. Of course they don't realise where the pic came from...

You could ask them for a royalty, or a free massage.
(

...I don't own the original images and I'm not about to try cashing in on someone else's nice pics. I don't think the guys from Tennessee should be using them in the way they have.

Having said that, it would be nice to get some cash for the Tesco Value Valentine photograph that gets printed by newspapers every year.

And while I'm having a moan, bloody myspace leachers... etc

Edit: if anyone from the "Tennessee Spine and Nerve Institute" reads this... a donation to the Beatson Oncology Centre would be nice.
(

you can block myspace i think
(

i haven't slept for 2 days, so that was exceedingly painful.
(

someone should change the frickin' law to stop those thieving cunts
(

(although how it can be enforced without majorly fucking up the way the world works, is beyond me)
(

wouldn't that then stop us stealing other people's photos to photoshop?
(

It's the age old problem of we can't really moan about other people pinching our pictures if they were made using images we nicked ourselves in the first place.
(

I use royalty free images :P

and don't make money from them
(

we are in good company.
(

...I used these excellent squirrel fishing pics to satirise something, I don't think anyone should be using the pic commercially. Maybe these chaps...

...from the Tennessee Spine and Nerve Institute should be more careful. Besides, squirrels are not well known for having back problems.
(

Shall we tell them?

And borrow images from their site...

..and fuck around with them

Should be the new compo.