On my honeymoon...
When I married the current Mrs. Dog we already owned a house together and had lived there for a couple of years. Hence we had everything we needed for the home. So, for wedding presents we just asked for contributions toward our honeymoon. This meant we could afford an awesome holiday.

We went to Kenya on safari and I can't recommend the country - or safari holidays anywhere in fact - enough.

We got to Nairobi in the early morning and were taken to our hotel. we were only stopping in Nairobi for one night, then moving on to the game reserves. After we'd settled in a little and had some awesome Kenyan coffee to wake us up they asked if any of us fancied booking dinner at the Safari Park Hotel just out of town. We didn't know anything about the place and were knackered after the overnight flight (no time difference, just I don't sleep well on planes). A few of the other people on our tour expressed an interest, and we'd been getting on well so thought we'd give it a go.

The drive there - across Nairobi at night - was awesome, exciting and terrifying all at the same time. They use the same highway code as India! Once we got there our group was shown to it's table near the stage and we ordered a round of Tusker, Kenyan beer and very good. The place started to fill up and the atmosphere was warm and friendly. Then the waiters came out and explained how the meal worked. Basically you got a baked potato and a bowl of salad in the middle of the table and the meat was bought round by the servers. We just had to call a server over and he'd get us some more meat.

When the potatoes came out they were small. Kenya is still very much a third world country and we assumed that this was the best they could get. Then the stage show started, which was a local dance troupe. Superb tumbling routines mixed with traditional dance and song. It was fantastic, but the main even was the meat.

We had a choice of buffalo, goat, mutton, crocodile, ostrich, camel or boar. It was cooked over a BBQ pit using swords as skewers through huge lumps of meat. The servers would go round with a sword of meat in one hand and a machete in the other! Your plate was a slab of slate, and they'd serve you by standing behind you, putting the sword over your left shoulder to the point rested on your plate and then reaching over your right shoulder with the machete to chop chunks of meat off onto your plate.

The meat was brilliantly cooked, with the crocodile, ostrich and goat being my favorites. We soon learned that the reason the spuds were small was so you didn't waste space on anything that wasn't meat. There was so much of it, and a seemingly endless supply of cold Tusker. The company was great, it was my first evening in Africa and it was a sensationally good meal. The night ended with me sharing some nice whiskey with our waiter who took some time to join us and welcome us to Kenya.

Everything about it was superb. The setting can make so much difference to a meal, and that was one of two meals I'd love to be able to re-do. The second was on our second to last day in Kenya. We were in the Masai Mara and got up early for a sunrise balloon ride. This was great, with hippos, lions, elephants and jackals all making a showing on the plains. We landed next to a tree (it was surprising how much control the pilots had over where we went) and had a champagne breakfast watching the sun rise over the African savanna. The guides cooked us breakfast on a gas stove and while I may have eaten better food, I've never had a better meal.
(robbersdog, Fri 27 May 2011, 15:12, 6 replies)

lovely read
im getting married next month and all that sounds awesome!
(Monkeystrumpet monkey. Monkey, MONKEY!!!, Fri 27 May 2011, 15:26, closed)

I hope you have a lovely day!
Two very quick stories about wedding days:

First, my own. It was a big wedding with about 120 people at the ceremony and the reception. Lovely to see so many people, but there were people there I hadn't seen for a long time that I wanted to catch up with but I didn't have time. I got frustrated with having to talk to boring rellies and add to this being nervous as hell I didn't enjoy my wedding day. My wife was the same. It was a day for everyone else, and they all had a good time. I think we were the only ones who didn't. I love being married to her, but the day itself wasn't great.

My mate Adam got married. I've known him for a very long time but hadn't seen him for a while. We got a few chances to chat during the night, and toward the end of the evening I sat down with a pint and thanked him for putting on such a good do. He said 'You know, something no-one ever told me about getting married was how much fun it would be, I've had the most awesome day ever'. I may have shed a little tear of hapiness for him :o)

we plan to make it as fun as possible
re: story 1 - our engagement party was like this, I dont remember seeing the missus for the entire evening as we "networked" and spoke to everyone in the room. Looking back I wish we could've done it together. We're determined this wont happen on the big day, might cuff myself to her if need be :-)

back to topic, the food tasting session was amazing! think for many people coming it could be the best meal they've ever had :-) and I really hope it is

Superb!
These are my favourite type of answers, too many people saying what and not explaining why. *click*
(

I've eaten there - or somewhere very similar -
about 12 years ago, and it was fucking brilliant. I was about to go up Kilimanjaro, and my friend and I decided that we'd use that as an excuse to shovel as much food down our throats as possible. We rolled out.
(

Did the same thing
For our honeymoon. That balloon ride (and the breakfast after) was pretty special. Were you there in time for the Wildebeest migration?

No dinner at the Safari Park Hotel though. Sounds like we missed a treat there.
(

We missed the full migration,
but there were still wilderbeest around although I'm not sure if they were the remaining few or the advanced scouting party :o)

Us, in the middle of the Mara plains. 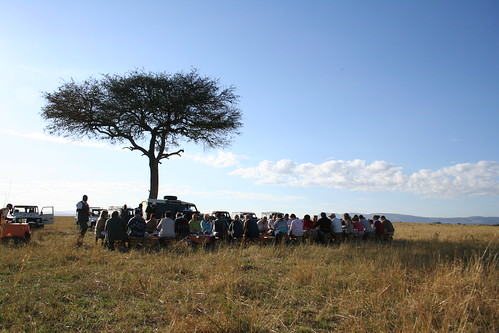 Just grass for as far as you could see.

This was three ballons of people. They used the sheer in the wind at different altitudes to steer across the plains. Before we took off they all agree a landing place and we all set off in very different directions, and then converged again at the end.
(robbersdog, Fri 27 May 2011, 18:17, closed)

Huge click!
For the story, and for my lovely sis-in-law, studying to pilot hot air balloons in memory of her recently late father, lovely man, who would have loved the food and the trip .. :-)
(Beer Elf Thought this was like a campfire, anyhow, on, Fri 27 May 2011, 21:32, closed)

Good luck to her!
We had a great time in the ball on and had plenty of time to chat to the pilot. He does this most days. He has a team of people who prep the balloon for him, under his supervision. He flies out over the Masai Mara, sees the sunrise and watches all the animals going about their business. He then lands the balloon, helps everyone out and sits down for champagne and cooked breakfast in the most incredible scenery. He still can't believe he gets paid to do this, and said there is a shortage of balloon pilots in Kenya. What an awesome job.
(robbersdog, Fri 27 May 2011, 21:42, closed)