I once devised a totally foolproof cunning plan to attract the attention of bikini-clad women, which - as you might imagine - failed miserably. Ever come up with a cunning plan for something? Did it work? What went wrong? Do you look back through the filter of the years with a burning sense of shame?

Suggested by Ring of Fire

A Whole 10 Pounds!
At the age of 7 it was like god had pissed liquid gold into my cupped hands, being given that 10 pound note - and possibly as sticky. Not having reached an age of any form of fiscal responsibility, I was like Paris Hilton - as soon as I had any money, I spent it on tacky crap; preferably in bright, primary colours. I had no notion of saving or reticence - just like Hilton again - so £10 of my very own 'to spend as I wanted' seemed like an unbelievable sum. A vast pot of gold; unbridled riches! I've no doubt I squealed and shrieked in an appalling high-pitched, ear-burning manner when I was given my prize.

Depressingly, I've just realised that I was probably being just like her again, but my bollocks to her ugly face, I'm not saying another word about that screeching ferret in a bimbo-blond wig. On with the story!

My sister had - I was convinced - eyed up my £10 pound prize with covetous eyes. I was immediately carried away by paranoia (look, I was that type of kid, ok? An emotional yo-yo) so resolved to hide my vast monies in the most devious and cunning place I could find.

First, I scouted out a superb hiding place - the garage crawl space! The deepest, darkest pit of terror a 7 year old was allowed to go near, the endless plunge into its inky black depths (it was 6ft deep) was the stuff of nightmares. It was covered up with planks of wood so oil stained that the RSPB would try to rescue them, but my tiny hands could still lever them up with some effort.

Next, I secreted my £10 in an old After Eight tin. After, of course, folding it lovingly in an envelope marked 'Bog Off, Poo-Face!'.

Then, even if the thieves were successful, at least I'd get the last word in. Hah!

After that, I encased the tin in a box of Lego; prospective thieves would have to smash their way through it! A somewhat arduous undertaking, this - but enjoyable for a Lego-minded boy. And, my god, did it make the finished product one mother of a heavy box! The Legos of elder days was made of sturdier stuff, I swear.

An elaborate cats-cradle of string was then engineered - the hefty box containing the world-shattering sum of ten whole pounds – my gods, ten whole pounds! - would nestle within, anchored over the void of the crawl space by ingenious string mechanisms. Success! A hiding place fit to fox Lara Croft!

Sadly, I had not factored in the role 'vibration' would play in my scheme - my dad reversed the car into the garage that night, and the thrumming engine dislodging the delicate ‘key’ string of my edifice, plunging the hefty box of Lego and tin down onto the concrete below.

I got a thick ear for having thrown more than £10 worth of Lego down a hole, just to try and protect a tenner. Furthermore, I'd engineered a god-awful racket in the middle of the night, and made my dad sweep up a pile of Lego in a pitch-black hole at silly o'clock in the morning.

But I still don't believe anything was wrong with the idea in principle.

Other cunning plans of my childhood days involve:

1. Trying to sleep in my school-clothes all night, in order to 'save time in the morning'. Plan rudely dashed by being discovered asleep fully dressed by my mum (she ran nightly ‘isn’t the brat dead yet?' checks). In a no-nonsense voice I was command not to be so damn silly, and the plan was rendered to naught. Failure: brisk and uncompromising.

2. Attempting to get a late-night drink of juice at the age of 5 without having to go through the strain of getting out of bed, I instead elected to head-butt the wall and make myself cry. Mother would then come, and could be made to get me a drink. Failure: painful - the crying part worked, but then my desire for liquid mysteriously vanished in subsequent flood of tears. Go figure.

3. Attempting to get my bed moved abutting the sink, so I could be even lazier about cleaning my teeth. Failure: 100% and comprising of a simple and decisive 'no'. I tried to move the bed myself in exploratory fashion, but it was a heavy wooden object without wheels: I only succeeded in giving my unshod, bare feet a healthy dose of carpet-burn; a memory that still burns bright and painful even today.

4. Trying a new novel way of breathing - I'd breathe in, hold it for a split second, and then let the breath rush out. It was strangely, incredibly addictive - go on, give it a try! ……. Trying it? Realise you sound like you are indulging in some undisclosed, dubious sexual activity? I didn't - was too young. Failure: humiliating. My parents didn't tell me until years later what my young self had sounded like -thanks folks.

5. Spinning around really, really hard on the shed roof, then jumping off with my arms outstretched. Naturally, I’d be spinning so fast that I turn into a human helicopter – an alluring theory, I think we’d all agree. Failure: Newtonian. That bastard and his theories; it’s a far less enchanting world for a child when you learn that gravity cannot be persuaded to look the other way. I actually landed on my feet, which was a bit of a fluke, but I was so dizzy from the spinning that I fell over and hit my head anyway.

Ah, the memories of what a brainless, crazed little shit I was... And my parents wonder why I loathe kids and point-blank refuse to spawn.
(IChewCandlewax, Fri 6 Jul 2012, 13:20, 16 replies)

Is it because you're a repellent virgin?

I feel I should apologise
for the above.
(

Well, you still may be technically correct.
Repellent is - of course - an entirely personal judgement. But as to being a virgin, you are 100% correct that I have never felt the need to plow a lady garden.

You've never had a hot toddy either?

Why would you invent such a dull story? 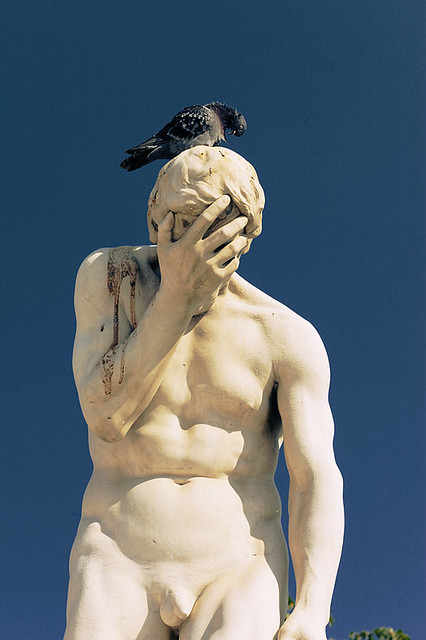 Them Greeks had tiny knobs.

Sleeping with your schoolclothes on.
I'm not alone... (I once asked my wife if she ever did it, she looked at me like she had never heard such a stupid idea).
(

(blink)
So you asked your wife if she ever went to bed with a school uniform on,
and she looked at you funny.

Why not ask her about the wetsuit and the Donald Duck face mask next.
(

American?!
How dare you!

Nah, I'm not in Team America - I just couldn't think of what we call those pits you have in garages. You know, so you can fiddle with the underside of your car?

They seem to be out of fashion these days, and we only ever called out The Pit, so I settled for crawl space as vaguely relevant.