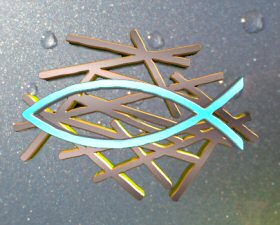 actually, it'd be the work of moments to turn

that fish into a crab
(

Who has crab and chips?
(

yeah, but I'm not your rendering bitch

no but seriously, my rendering program only works on my other PC which I've been trying to keep virgin so it doesn't get loaqded up with crap and slows down etc. and it's a Windows 95 prog which never got on well with Vista... I can render you a crab in the same mode but it will not be a 30 second turnaround :-)
( If fish don't want to be eaten, then why do they taste so good?
(

translation: sashimi, which is what you call sliced fresh fish: sushi is what you get when you have rice in there too.
(

i bought my mum one of those for christmas one year

when i was in the states

i saw one which was a fish with 'TRUTH' in it, eating a darwinfish
(

I wonder if someone does a bike version...

also, Darwin is an anagram of my real name :)
(

i like the way you think. i hope to see this go into production soon :)
(

was from a DB9 in the hold yard that I was testing for quiescent current drain :-)

Did you find any currants escaping? If not, were other dried fruit responsible? :)
(

the angelica and tamarind rind kept slipping through the gaps

don't get me started on the little silver balls. Fortunately the fondant sealed the gaps well :-)
(

and make me these whilst you're at it: 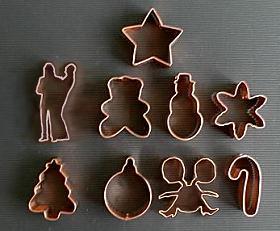