i won a fancy dress competition as a 6yo
i went as Skeletor and i had purple cardboard armour. i'll try and dig out the photo
(

When I was an 8 year old boy
My mam spent ages making me a Purple Meanie costume from the Yellow Submarine (my favourite film growing up in the 70s). It was a masterpiece.

I won a prize at the school fancy dress competition. Best Girls Costume.
(

I once got asked to wear black trousers at a christening...
Because I'm such an autistic I couldn't possibly do so, and now my family hate me.

Clubbing in fancy dress
Years back I went to a valentine club night. Traditionally the club night is always themed, and even though I had gone there many times before; I had never actually partaken in fancy dress.

Picking a costume was quite tricky, I decided on a Vampire costume, as I couldn't think of anything more romantic than sucking on a virgins neck. Maybe not the best of choices but that's the decision I had made. My brother and his fiancée were going too, dressed up as Zorro and Zorro's bird.

I spent quite a bit of time getting the costume, skull topped cane, cloak, top hat, fake vampire teeth etc etc. I was sure it would be good fun, regardless of looking like a complete spaz (or someone that's trying too hard... or both).

The night came and of course nights like those are normally accompanied by stimulants of one kind or another. We got changed, called our cab, chewed some pills and took off, not literally of course. Completely buzzing on the way we were really looking forward to it, nights at that club are always great so taking part should make it a bit more fun, in theory anyway.

Except... arriving at the club whilst caned out of our minds, we stood in a very boring and plain looking queue, no one else dressed up, the instant comedown was quite unexpected. We stood there feeling like idiots, but thankfully we were allowed in first because we had made an effort.

It turned out everyone else decided to change once they got in the club, so more costumes appeared as the night went on, mainly consisting of pink items of clothing, very original.

A couple of years back our and Air Traffic's bar, Castaways had a "School Disco" night.
Cue lots of burly RAF types, and one or two actual females squeezed into schoolgirl uniforms.
I went over straight after my dayshift so I was wearing normal clothes.
With a brown dirty mac type storesman coat that I took from our tech workshop and a bag of Werther's that I got our admin bloke to go across to the NAAFI to fetch me. I then got my beer and stood outside the doorway.
Yup, I went to the school disco as a nonce.
:D
(

Oddjob's dog
I went to a James Bond house warming recently. I'd just got a new suit and with the addition of a black silk bow tie I was unimaginatively but appropriately dressed. My girlfriend though went all out, low cut evening gown in turquoise silk (well, OK, rayon), make-up applied with an end loader and beehive hair last seen among girl groups from Detroit, 1964.

Topping her off was a fur stole which she had specially borrowed from an aunt, who'd had it forty years.

Our hosts had a miniature dachshund. As soon as he got a whiff of the fur stole he started to bark. And bark and bark and bark. Then he barked some more.

This Question should win
cause it's a QOTW dressed up in crap.

Happened tonight
My daughter won her Brownies group halloween fancy dress tonight dressed as a werewolf. However, she told me about her friend who went as "A Tired Mum", as in "Tired Mums are always scary, they shout all the time".

I wish I had pictures...
So if anyone on here was in the Vic bar in Newquay on Halloween 2003 and remembers this (and has a photo) please send me a copy.

Anyway, I'm sure there are plenty of Red Dwarf fans on here who happen to remember the episode "Quarantine"...

Well, all credit to the comedic talent of Rob Grant and Doug Naylor who provided me with the perfect costume.

A few of us used to do an annual Christmas panto
in the village hall for the old folk. This particular year the vote was for Cinderella and it was my turn to write the script. I'd always wanted to play Long John Silver so naturally I wrote myself in. Here is a scene between LJS and one of the Ugly Sisters. After the performance we upheld the ancient tradition of going into town in costume and getting pissed. Ugly Sister pulled, I didn't. Right now
I am Sheik Yerbouti.

Oh well nevermind
As soon as I heard Kurt Cobain had died, I rang a friend who was a huge fan. As the answerphone beeped I put on a crap American accent and threatened to blow my head off if he didn't ring back. Luckily he saw the funny side, which is more than his girfriend did later that year when I turned up at their Halloween party as Dead Kurt. Oops.
(Mr McKenzie Mr McKenzie, Wed 31 Oct 2012, 14:41, 1 reply) 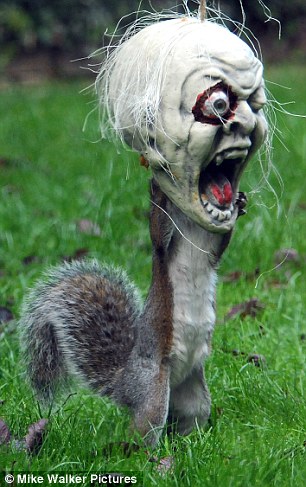 No photos exist, unfortunately
My sister attended the 1987 World Sci-Fi convention, which was here in Brighton, dressed as Eccentrica Gallumbits, the Triple-Breasted Whore of Eroticon VI. She made a startlingly realistic third tit, from a white balloon filled with red jelly, and a three-cup bra, which was worn under a cleverly made cut-away top which hid the "join", but still exposed acres of flesh, both real and faked.

Now she's a big girl, endowed with a generous quantity of what Derek and Clive referred to as "Busty Substances", and it's safe to say that the costumes which her husband and I wore, as her bodyguards, got very little attention...
(moon monkey is busy making memories worth repressing, Wed 31 Oct 2012, 11:44, 9 replies)

I'm another costume whore
I love a bit of costume making

All made of cardboard, apart from the ventilation duct arms. The body eventually disintegrated with over-use, but I've still got the head so I can re-create it one day.

Mr Spacehopper at Glastonbury. Well, if you've got a spherical gut, you might as well make it work for you.

The horns were cast in silicone, from moulds taken from a genuine original 1970s spacehopper. Annoyingly, the only people to jump on me and ask for a bounce were men...
(moon monkey is busy making memories worth repressing, Wed 31 Oct 2012, 11:37, 3 replies)