Labour leader Ed Miliband recently dashed into the middle of a road to save a fallen cyclist. Who has come to your rescue? Have you ever been the rescuer?

Kidney Donor
Not me, but a colleague/employee donated a kidney to her spouse, since none of his relatives were willing. That takes courage.
(

This Sunday me and my best mate helped a couple of Polish girls whose car wouldn't start
After charging their battery and all the rest of it we could get their engine to turn over but it still wouldn't catch. Luckily for them, a neighbour was walking past and said he knew what the problem was. Unclipping the air intake hose, he stuffed it with a rag and got them to try and start it again. This time it caught instantly, he took the rag out and reconnected the hose to the filter.

It was a neat trick that I'd not seen before, thought I'd share.
(

I was having difficulties doing something
then someone helped me.
(woocfot friends with Sacha Distel, Wed 15 May 2013, 10:50, 6 replies)

I was sinking a few with Fergie the other week
when he asked me for advice on his future.
I said, "Well you don't need a job any more so why not let Moyes 'ave yours?"
He put me on ignore.
(

My Thai girlfriend's a really good driver, and races competitively.
She's developed a particular manouevre that to the uninitiated invariably messes them up, which is of pulling up alongside them, slowly pulling slightly ahead, and then gradually pushing further and further towards the barriers, forcing them to slow down and allow her to go on ahead.

It's become quite a well-studied technique, and is known as the Mai Sai Veer.
(

Looks like it's oven-baked green legumes for dinner.
This really happened.
I've been driven in 4 wheel drive cars most of my childhood - kinda a necessity in Zambia.

About 11 years ago I bought MY first fourby (4x4=4 by 4=fourby) - a Toyota Landcruiser FJ60 (I forget the year). Something like this with aluminum bull-bar and runner boards for $4000. 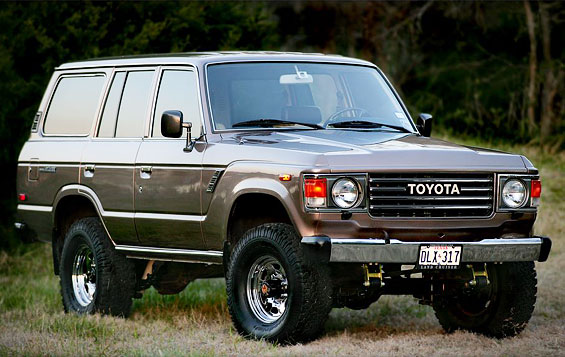 It was a beauty, dualfuel on autogas and petrol. Very cheap for such a lumbering beast.

Now. I had never driven my own car before when I had been fourby-ing in the past so I really didn't know much about prepping the vehicle etc.

So. My neighbour and I decided to head down to 1 of the local beaches to do some fishing. In my new fourby. On the sand.
Off we went, I drove down the ramp onto the sand no problems and then we dropped a line in and cracked a beer.

No fucking bites apart from blowies about an hour later so we packed up and jumped into the car. I put it in reverse, eased the pedal slowly and within seconds I was pretty much up to the rear axles.
Out we get and scratch our heads. Further up the beach is another bloke fishing with his teenage son. I walked up and asked them if he could give us a tow. He asked me if I had my tyres down - the lesser pressure gives the tyres more surface area on the sand. I told him yes, and then he asked if I had a pump. I looked at him quizzically and dug out the bike-tyre foot pump I had in tool chest. He managed to stifle a giggle and told me I could use his to re-pressurise my tyres once I hit bitumen.
He got his car backed up and got out his snatch-strap (fnar). Then he said these immortal, ego-crushing, "You're a n00b" inducing words -
"Have you got the wheel-locks on?"
"What wheel-locks?" I replied.

He then showed me the front wheel-locks (on "Free"), shifted them to "Lock" and told me I was good to go. He got his car out of the way and I pretty much effortlessly backed off the beach and onto the ramp.
He & his son had the decency not to laugh at me. We used his battery operated compressor to re-inflate my tyres and off we went. I offered to buy him a few beers but without laughing in my face he refused but strongly suggested that I go to a 4x4 training course.

My Father's Day presents that year were a Haynes manual for my car, a cigarette lighter sourced tyre compressor & a snatch-strap.
(Misery McUglywife an attention seeking sociopathic fuckstain., Wed 15 May 2013, 9:24, 37 replies)

There's a narrow twisty lane near here with a huge deep ditch along one side. One night I was driving home along there and spotted a car on its side, wedged in the ditch behind a metal post.
I stopped and found that while everyone had got out and nobody was hurt, nobody could work out how to get the car out either.

The driver and several passengers, aged around 20, were about to get into the ditch and try pushing it out. I told them this looked too dangerous. We continued to scratch our heads. I'm assuming nobody wanted to involve Dad!

Just then another driver pulled up in front, produced a rope, tied it to his towbar and the front of the ditched car and dragged it out without a word.

Then he jumped out and told the driver to try starting the car, and it worked right away. While everyone was cheering he quietly drove away.

He was only a young bloke himself, I'd say about 28, and he didn't have a posh 4-wheel drive car, just some excellent timing and a severe case of manliness.
(Juan Quar is clinging to her front teeth on, Wed 15 May 2013, 8:54, Reply)

Brake Fade
We were returning from a summer holiday and the weather turned bad. The highway flooded and in one dip we drove through about a foot of water over about 50 yards. The old Simca Aronde had drum brakes and just over the next hill was another stretch of water. Dad put his foot on the brake but the drums were full of water and they hardly worked at all. So there was an almighty splash and the engine snuffed. There we were in a foot of slowly rising water and only about 25 miles from home.

After maybe ten minutes of stuffing around to no effect a bloke in a truck came along, said something about water in the cylinders and offered us a tow. He had a good rope and we tied the old Simca to the truck. He took off quietly enough but soon it seemed like he forgot we were behind and he must have been doing 60 mph which was faster than Dad normally drove.

After about three miles of this the rope broke and we coasted to a halt. The truck just kept on going and vanished. But we were out of the water. Dad's never been known for his mechanical instincts but he got the idea of taking out the spark plugs and cranking the engine. Water sprayed out and we waited a few minutes and did it again. Dried off the ignition, put the plugs back in and the old girl started on one or two cylinders. After a few moments it was all four and we got home only an hour or so later than expected.

On a day out at Brands Hatch, my friend and I were paying no heed to the motorbike racing, and were instead mucking about in the woods (such as they are).
A toddler had obviously had the same idea, but we weren't paying him much attention, and he wasn't interested in us. Until we noticed him, sitting in a ditch, about to be squashed by a Range Rover. We scooped him up, and found ourselves entertaining him for the rest of the afternoon, until his parents materialised out of nowhere to reclaim him, without so much as a thank you. Apparently, eight year olds make excellent, free childminders.

A couple of years later, I was on a day out at the beach at Southend (jet-set lifestyle, huh?). Playing in the sea, I noticed a younger boy trotting down to the water with an inflatable dinghy. Jealous of his dingy, I watched with envy as he floated away from the shore. Observing that he has no oars, I swam out to him, and offered to tow him back to shore. Having performed this daring act of heroism, I instructed the young boy to be more careful in future. Mere minutes later, I see him floating away again. Hero that I am, I retrieved him once more, then decided to inform his parents of the situation. All I got from them was a confused shrug. We left the beach shortly after, so I assume that the boy was eventually lost at sea.

I think I know how Superman feels.
(

Bloody Kids !!
I was slightly the worse for wear after a mini boozing session on a camp site in Wales about10 years ago and was stumbling back to the caravan of a lass I'd arranged to meet. It was about 8pm and there was quite a lot of activity on the site, as you would imagine in Prestatyn (the hub of all that is Welsh and Vibrant !!!!). As I was trundling along I saw a young lad tear-arsing out of the site's club house and right in front of a Ford Scorpio (remember them ?) that was moving at quite a pace for a camp site, so, with no thought to my own physical safety, I dived full stretch to "save" the youngun. Long story short, I slammed him into the side of a tool shed and was the most hated man in Wales for a few days. Poor little fella had a facial graze that looked like someone had ironed him.
Luckily I wasn't hurt at all.
Bollocks to saving people, once bitten and all that.
(TheDrunkenBear moved in with your mum on, Tue 14 May 2013, 22:51, Reply)

I was a bit late getting down the lane this morning,
and I thought I might miss the bus.
Luckily, a neighbour came by and gave me a lift so it was all okay.
(

About 15 years ago, I was riding my shitty russian motorbike through the mountains of vietnam at night in the rain
The vibrations of the engine were constantly shaking bits of the bike loose, and my headlight wasn't working.
Coming around a corner down the hill towards me, a minibus appeared. It was already locked up in a full skid, and proceeded to leave the road just as it passed me, crunching off the mountain side in the blackness. I slowed but didn't stop.
Last thing I wanted was to get invovled in some big shitfuck with the corrupt Vietnamese police. Never found out what happened. Still think about it sometimes, though.
(

Be a saviour of this forum
Mods, you must be able to tell that some people add real stories here , add value, add entertainment.. add the sort of content that used to make me roar with laughter...

And then there is Brayndedd, Janet A, Shambolic and sundry other wastes of blood and organs. People who only live to hurt others.
Seriously. get rid of the troll scum or lose those of us who came here to add value. Your site is dying and you are failing in your duties.
(Carpe Cyprinidae, Tue 14 May 2013, 18:08, 32 replies)

I saved the good name of RoF

Hey!
You know what, right? Someone should answer this telling the story of STAR WARS, and, like, Han and Luke and Leia could be the saviours of the rebel cause!

That would be really lol!
(