Not a lot of people know this... 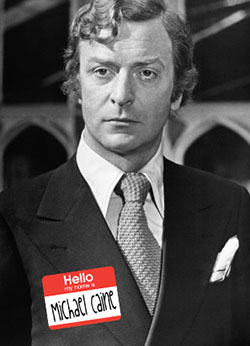 From the Illustrated Bizarre Facts challenge. See all 61 entries (closed)

Michael Caine claims his portrayal of Alfred in the Nolan Batman films was in the SAS before he became a butler for the Waynes.

Hence the "some men want to watch the world burn" dialogue in Dark Knight.
(

I liked the bit where he says to Batman

No, that was in the Only Fools and Horses special.

I did like his delivery when he said "At one hundred yards, volley fire present! Aim! FIRE!" in The Italian Job.
(

and then he calls Captain Kirk a 'douchebag'

My favourite is when he tells batman that the batmobile isn't subtle enough and lends him his honda civic instead.

I liked the bit where he opens an expensive restaurant.
(