Let's get that Pete Wylie song to number one eh B3TA? 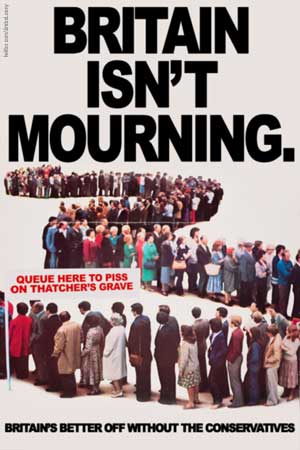 From the Thatcher challenge. See all 152 entries (closed)

My mate's dad took that photograph

and she's in that queue somewhere
(

your mate´s dad is a transexual?
(

Bob Cramp, he was quite an established photographer back then, but like many photographers fell out of favour with the lovelies. Runs a B&B now
(

all the fun's lost now
(

I fell no shame.

we're all the colours of the rainbow ...except blue

I'm not following the blue references.

Over here blue is liberal. I'm guessing blue is Tory.
(

YEP.....given that it's a joint affair though it really should be green (blue & yellow)
(

I wonder how many of you

actually remember living under a Thatcher government? I was very far from being her biggest fan, but posting things like this is disrespectful and ignores the positive things that she did for the country. Flame away but at least be over 45 if you want me to take you seriously.
(ianisme, Tue 9 Apr 2013, 22:46, archived)

It led to double digit inflation, interest rates at 15%, and the second boom and bust recession in a row.

Show me a positive, and get slapped with a tirade of negatives (including how neighbors became enemies due to her policies)...( and something still not recovered from )

I must be a troll

because I'm not prepared to jump on the hate bandwagon? Perhaps you have forgotten about the winter of discontent and the preceding disastrous labour governments? Three million unemployed sound like a Labour success story does it?
I haven't and I don't cherry pick what aspects of Thatcher to attack. Like I said, I'm no fan of hers and never was, but she did turn the UK around. She did stand up to Europe, she did defend the UK's interests and she did eventually put more people back to work and bring inflation down to very low levels. You can hardly blame her for what went before. If you thought that seemingly endless strikes were really what Britain needed then you were as much a part of the problem as the 'evil' Tories.
(ianisme, Wed 10 Apr 2013, 4:42, archived)

So you must be 80 or over to have an opinion on Hitler then?
(

I know that calling me an idiot

does nothing to legitimise the outpouring of hatred against Thatcher, especially by people who weren't even born when she was PM. If it makes you feel better to call those who disagree with you stupid names then feel free to do so.
(ianisme, Wed 10 Apr 2013, 6:41, archived)

Now piss off you cunt of an apologist.