little rp to say...ignore the trolls! 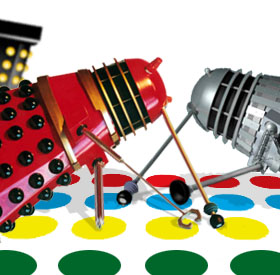 don't you watch supernanny?! they thrive on your upset.
(

In his / her case

it should not have a choice of unignoring him / her
(

if you're going to ignore someone

can you do it quietly? ta
(

I think it's illegal

to play it while being fully clothed
(

But I am afraid it will all end in tears.

i loves the upsidedown dalek (:
(

You have to wonder if it's worth even ignoring them, I mean it takes them more time to re-register and do some cheap shop and then type a lot of shit than the actual amount of trouble they cause. That and it's rather sad that this is the only form of human contact they get.

It does not require a majority to prevail, but rather an irate, tireless minority keen to set brush fires in people's minds.

I am in complete agreement with you on this and I imagine many, many other things
(

It's the daleks from those two crappy spin off movies with the fake doctor and the shed tardis. Though it would be kind of funny to expose the kids who watched that to the idea of Davros and his ethnic cleansing.
(Guineapiggy Fuzzeh!, Thu 5 May 2005, 22:46, archived)

without soundy nerdy...are you disrespecting peter cushing and bernard cribbins?!

the best double act since morcambe and wise!
(

Posting "Without sounding nerdy" on B3ta is to fail before you have even begun.

Doctor Who IS RUBBISH. Okay?

Doctor Who is lame. Stupid Daleks, they're just little aliens in a cage. RUBBISH.

Christ, has Tonay still not given up?

We get the trolling thing, but when you keep going and going and going on the one note, it kind of defeats the purpose. Trolling is meant to annoy people, not bore them.
(Tetsuo, Fri 6 May 2005, 14:10, archived)

i'm extremely ashamed at an rp fp (but it was never before, i hasten to add) :)
thanks mysterious person!
(

no shame, only joy!