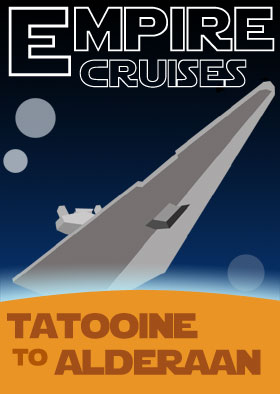 From the Advertising from the Future challenge. See all 335 entries (closed)

I'm not too into star wars, but I love the cunard line influence. Intended, right?
(

Absolutely intentional. Glad you liked it.
(

But wasn't the whole Star Wars thing "a long time ago" rather than in the future?

It's a fair point

but I've been meaning to do one of these Cunard style Star Wars things for ages, so the compo seemed like a good excuse!
(

Yeah - and Alderaan isn't there any more

... unless it's New Alderaan... but no one knows where that is ... so offering holiday trips there would not help in maintaining the secret, unless they were secret holiday trips... in which case advertising them is a work of evil.
(

Isn't Star Wars set "a long, long time ago", rather than in the future.

However, I don't actually give a shit and this looks great so I shall woo it.

but surely the classic Cunard images are from the 30s? Which *is* a long long time ago.

And America might as well be in a different galaxy, so yeah, it works.
(

Yay for retro-futurism. Or is it future-retroism?
(

You've really captured the style of those old posters. If George Lucas wasn't so litigious I'd suggest selling posters like that...

I've dropped you a gaz about a decent sized image, but it's an upscaled version with a little pixellation on it (I never expected to be asked for a super-sized version!).
As several people have asked for a large version, I'll try to oblige and I'll post a link here in a couple of days (unless George Lucas threatens to sue me).
I'm aiming to do a 1600x2400 (roughly A3). Please be patient, as I'm a little busy right now.

I too am awaiting the poster-sized version with childlike glee!
(longtimelurker, Fri 11 Apr 2008, 13:08, archived)