Custard rockets, feather swords, and doomsday devices made of string. Invent them, then post them. Drawings, animations or full scale replicas built in your garden are all accepted. Previously...
The Battenberg Trebuchet was developed in 1312 as a means of besieging heretics who refused to accept the Treatise of Nyom-de-Lyons. It didn't become obsolete until the introduction of gunpowder. Several attempts were made to produce a battering ram based on the Battenberg cake, but designers failed to agree on a suitable punny name (Batterberg? Battening Ram?). It did, however, lead to the development of an impact-resistant marzipan which is in use to this day in body armour.

The Muffin Onager is considered one of the oldest and most versatile cake-based siege weapons in the world. Capable of propelling muffins, cupcakes and even fairy cakes several hundred metres, this weapon caused devastating crumb-based injuries. It was theorised that a slightly overbaked blueberry muffin could penetrate a wooden stockade wall at 100 metres.

The Swiss Roll Ballista (the "Rollista Helvetica") was developed by the Romans just prior to the Siege of Alesia in 52BC. It was reknowned for durability and tolerance, capable of shooting vanilla, raspberry and chocolate swiss rolls of varying quality, from Tesco Value up to Sainsburys "Taste the difference". However, siege engineers had a saying : "Kipling Detesta Matribus" ("Mr. Kipling is the dread of mothers"). Even today in some parts of France the Swiss Roll is shunned. The "Slightly Annoyed Cat"
The SAC would be floated over enemy territory where the cat, being slightly annoyed, would attack the balloon and land. It would then infiltrate the enemy command centre and scratch the furniture with its claws, demoralising the enemy and in some cases causing allergen-related sneezing.

The SAC never saw widespread use due to a worldwide shortage of string. It did, however, lead to one documented case of a dead sparrow being discovered in the bed of a minor Stabsgefreiter in Berlin in late 1943.
(

If you seek peace.....prepare for war Available at all good child parties 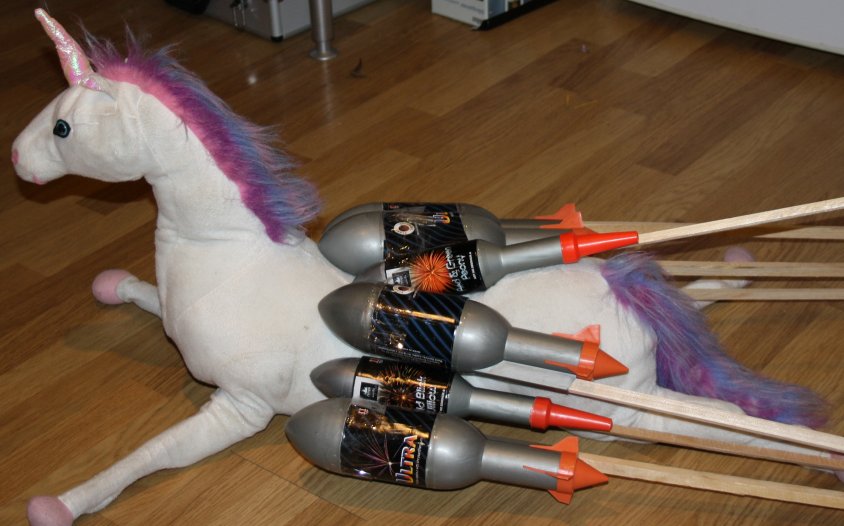 Capable of travelling faster than the speed of love this devastating weapon will probably fire rainbows or something... ;-)
( Murder sheep has a taste for MURDER