Irony, or summat
Despite the fact that this QOTW has garnered fewer answers than any other in the history of QOTW, there has yet to be the traditional slew of "LAST!", "LASTER!", "LASTEST!" non-answers that usually erupt of a Thursday morning, and I was musing this over my croissant earlier when I thought "If there had been such an outburst, it would have constituted a social media meltdown and would therefore have inadvertently answered the question, albeit in a not remotely entertaining manner."

Not really a meltdown
But can it not be me that has to explain to micto that he has me on ignore and not the other way round?
Please...
(Misery McUglywife an attention seeking sociopathic fuckstain., Thu 27 Jun 2013, 0:38, 9 replies)

No, YOU had a social media breakdown.
By replying to this. Or not doing so. Or whatever you do for the rest of your shitty, unhappy life. You cunt.
(

Got a confession to make: I AM DR SHAMBOLIC
I made Dr Skagra up as a joke!

Would users kindly refrain from changing their usernames?
Also from having comedy sockpuppet accounts.

Trolling a Greek Friend.
Many of my Greek friends post on Facebook in English or type in both Greek with English subtitles for their other non-greek friends to understand.

However one only posts in Greek and as I have no idea what she's gibbering on about I typically 'like' every comment.

This generally went without incident until I inadvertently 'liked' the announcement of the death of one of her family members.
(

I don't think that anyone here has me on ignore,
so I'm just going to sit here, holding my breath.

"Reverse trolling" seems to be The In Thing now.

I should just have browsed through my gazbox. 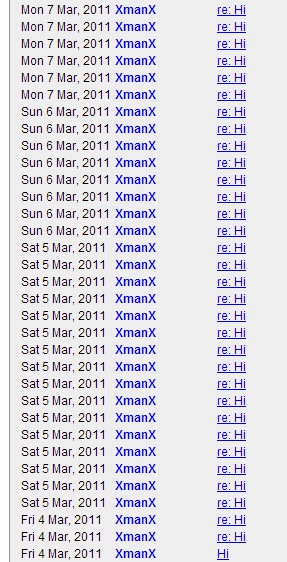 It's not quite a meltdown, yet
but if you find yourself consistently replying to someone who has you on 2.0, you've probably got one in the post
(

I'm back
I've had a terrible couple of weeks, or forty, as us Ozians call that particular unit of time synonymous with 14 days. I've been like an emu with a scrub tic up it's arse, unable to post my amusing and thought provoking stories on here.
I lost my password! I keep my passy on a piece of paper, along with my date of birth and full name spelled out in big letters. I lost the piece of paper when I lost my wallet, which I lost when I lost my strides.
You know how you get home from KFC, carrying second dinner into the house, and your wife screams "Where's yer fuckin' strides yer fuckin' idiot"? Well that's what happened to me. It was a bit of a shock, I was sure I had them on when I left the house, but there they were gone.
While I waited for the grease to settle in the buckets, it's great for dipping bread in, I had a think about my strides. Then it hit me! And while I was still stunned from the hit, it grabbed my bollocks and twisted them round then kicked my in the knee. Word to the wise, don't ever forget my daughter's Mega Zinger Combo Sack with Cheese Splat tm.
(ringofyre, Tue 25 Jun 2013, 12:06, 29 replies)

I saw quite an awesome real-life meltdown on Saturday night
Coming back through Archway on the night bus, I was with a couple of ladies on the back seat, chatting to a couple we had just met. We had pizza, which we shared with them. As the bus stopped and everyone had to get off, this screamingly camp guy started shouting something like "Well, I've learned one thing this journey, I hate American girls!" at us. So after we pointed out that there were no Americans present and the word he was probably looking for was "Canadian", he went into a complete spazz-out and started pushing my friend, screaming at the top of his lungs, crying and spitting in her face. Which would probably have been a bit frightening if he hadn't been camper than the Volkswagen Type 2.

Anyway, after he'd bawled incoherently at us for a while, stamping his little feet and getting himself into a right tizzy, we got bored and wandered off to grab a beer from the 24 hour offie for the walk home. We passed him on the way back, where he had his phone out, animatedly relating the incident to someone who was evidently delighted to hear his hysterical whining at 2am.

It was at this point that I was sorely tempted to ask if he'd ever posted online under the username "Rory Lyon".
(

Oh what the hell.
Something something standup waaaaaaa!!
(piston_broke Actually thinks Supermatt is a decent bloke., Tue 25 Jun 2013, 11:10, 6 replies)

DOCTOR SHAMBOLIC IS A GAY CUNT

"Some People Are Too Stupid To Live"
Began the facebook post of someone in my feed, as he posted a link to a news story about Ann Coulter refusing to board a plane with a black pilot.

In come the replies gently pointing out the fact he'd linked to a post off the Daily Currant and that she does in fact have a black boyfriend.

Ok maybe not a 'meltdown' but the irony of that first sentence gave me a good chuckle.

Happy Slapping currently being looked at right now
Is a Facebook link to the vid. Some ugly 16 year old girl thought it would be a laugh to slap a 60+ old guy and have the video stuck on a public page on Facebook this afternoon. Of all the fucking stupid things to do; she and the surrounding crowd have been named and shamed and she's literally just been nicked.