A genuine mystery.
Not so long ago - last summer, in fact - I was staying with friends in a little village in France, miles away from any significant street lighting. One evening, wandering from the bar in the next village, I happened to look up at the sky and noticed something above me.

Three or four small lights, one of them flashing, were moving almost silently above me. Clearly, they were part of a vehicle of some sort. I could just make out the sound of the vehicle's propulsion unit.

To this day, I've no idea what the object was.

Well, I mean: it was obviously an aeroplane. But was it a Boeing, or an Airbus, or maybe something else? I don't think anyone can give me a satisfactorily conclusive answer to that. You have to admit: there are some things about this universe that we'll probably never know.
( 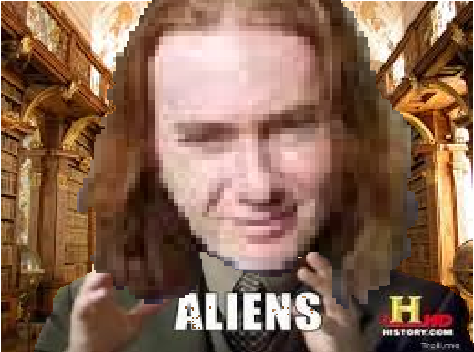 I thought I saw a UFO once
but it turned out to be an Iridium communcations satellite, flaring up.

horse is a alien!

Reading between the lines - the real question that this particular QOTW seems to be searching for an answer for is -
How would you go about subjugating loads of poon, what reading material would you use to help achieve this and what specific type of rat would this make you?

scousers are shit, aren't they

I've had some pretty close encounters since I took over leadership of the Urban Felchers Organisation
tits, muff, and loads of spunky bumholes
(

I once built a 'UFO' in the back garden as a surprise for my girlfriend.
I dressed up as an alien and everything, and even built a little ramp up to the door. She came outside and got the shock of her life, but I told her I'd be gentle if she let me take her up the gangplank.
(

Leicester, circa 1997
I'd been out at a friend's house taking some massive drugs and I was wandering home about midnight, feeling altogether rather spacey. As I walked past Victoria Park I fancied that I could hear snatches of music on the wind from somewhere nearby. Assuming that there was probably a late gig at de Montfort hall, I didn't think much of it until I got a bit closer and saw through the trees a shining triangle of light pointing towards the sky. The music seemed to be coming from it.

"Fuck", I thought to myself. "I've finally done it. I've taken too many massive drugs and now I'm flashing back to Glastonbury or something."

Never one to miss out on a new experience I decided to investigate further and discovered that the glowing triangle was actually a free-standing, three-sided pyramid or tetrahedron made of some semi-translucent material and lit from within. Inside this structure, only faintly visible, was a band playing Stairway to Heaven. As my eyes (and mind) adjusted to this new situation, I began to notice that there were people sitting around on the grass drinking from paper cups and smoking. I must have looked a bit lost and confused, because a man approached me and asked if I'd like a cup of tea. I said that I would and he came back with a paper cup of tea so I sat down and drank it, listening to the music.

After a while I realised that while the tea was very welcome, he hadn't really explained what was going on, so I sought him out and asked: "What's going on?"

"Ah," he said, as if it was the most obvious thing in the world. "I'm from a marketing company and to celebrate the launch of the PG Tips pyramid bag, we've got ten of these 55ft tall pyramids and we're using them to play a 24-hour gig in various cities around the UK."

"Oh," I said. I had another cup of tea, listened some more and then wandered home, still feeling altogether rather spacey.

The next morning I went into university as usual and bumped into a couple of friends who lived near Victoria Park. None of them had seen anything the night before, especially not a 55ft tall glowing musical pyramid tea bag. Worried that the whole event had been some kind of massive drugs-induced hallucination I went out to the park, but found nothing but a patch of flattened grass. It was only as I was walking home that night that I spotted a photograph of the giant glowing pyramid on the cover of the Leicester Mercury, beneath the headline "Have the aliens landed? No, it's just a tea bag".

I cut it out and kept it as a reminder that no matter how strange things seem there's usually a perfectly logical explanation - in this case, that there are obviously far too many drugs in marketing.
(

A while back I was attending university in a run-down Northern town.
Around 19:00 on a cold, clear winter's evening a friend and I set off from the "student village" to buy some much-needed supplies.
The next recollection we both have is turning to each other whilst pushing an empty shopping trolley between us at 22:00. We both felt a little dizzy and confused and had no recollection of what had occurred in the previous few hours.
All I can think of is we must have been abducted by aliens on our way to the local petrol station where our dealer worked.
(Me, I'm not... in any way intoxicated, Thu 1 May 2014, 17:46, 1 reply)

Ooh goody
They chose my question!

That makes my exile on this puny planet just that little smidge more bearable.

You may be disappointed, elated, or indifferent to hear that I will not be posting any stories this week. You see, there's no such thing as 'alien life' to one such as I. It's all just - life.

I will, however, enjoy reading all YOUR stories!

I may even be able to offer advice and guidance to those who need it, or who need not for it not.

I've had the willies up me a few times.

Subject:
Back as a spotty teenager I once put one of those PC demo disks into my 486's CD Rom to look at later, and shuffled off to do something else. Probably a wangle.

Suddenly my room was filled with spooky alien sounds and music like from those scary films.

Terrified by this pending alien invasion I crouched in a corner to hide.
Upon realising I wasn't in immediate danger, I crept up to the window and snuck a peek from behind the curtain.

There was nothing there but my normal view of the back garden.

Turns out my close encounter was my first experience of CD auto-run and a musical menu screen.
(

I once saw an alien piss in it's own mouth.

Shut up you plonker
UFOs in Peckham.

I had a close encounter with a shed once...

I was approaching a castle at night time, and the guard asked "Are you a friend?
... or are you a foe?"
(

I once tripped over at a gig and accidentally pulled down the hipster jeans of some girl standing nearby.

I'll just repost this:
True story, but apologies in advance for length.
You remember the UFO flap a few years back, when we had Nick Pope "Britain's Own Fox Muldertm" telling us about major UFO incidents in the UK?
Well, there's one story that he kept trotting out about a UFO being spotted at a major UK airfield. This story he said, MUST have been a genuine UFO incident because it had been spotted by the base's guards and also, critically, by Air Traffic Controllers and a trained Meteorological Observer, who would therefore be ideally suited to gauge the height, size, and speed of the object in question (having been well experienced in gauging cloud heights and weather balloon heights and speeds).
Unfortunately however, this incident turned out to be more a case of how easy it is to fool even an experienced observer. Or, more accurately, how people tend to see what they've been set up to expect to see.
Over the previous couple of weeks there had been major airtime and press coverage of UFOs over England. When the first calls were made to the Met office on the night in question the observer shrugged them off. However after the gate guards also rung up to tell him they'd seen the UFO he went outside again and saw what he described as "Three lights at the angles of a very large triangular object, moving extremely quickly to the south of the airfield, after a few minutes a fourth beam of light appeared from the object directed to the ground."
The "Extremely large" object he'd actually seen was a Police Helicopter, as was later established from it's flight log. However, because he (and the guards for that matter) was subconciously expecting to see a UFO, that's what he reported. The airfield had been closed for the night as it was a bank holiday weekend with no night flying scheduled, so there weren't actually any Air Traffic Controllers on duty. Had there been they would undoubtedly have been able to contact the UFO, bursting the myth there and then.
(

I am a complete sceptic about anything like this, as well as psycics, alternative medicine and religion.
Give me irrefutable proof, or piss off is how I usually deal with it.

One day a few years ago though, I was driving home along an elevated section of road, which went between two tunnels, and was open on the side to the sea.

As I came out of the first tunnel, I saw in my peripheral vision something moving along beside me. It couldn't be on the road, I was next to a barrier, with a 150 drop the other side. This thing was, well, flying is the only description.

It had bright lights on it, some of them were blinking. It was keeping perfect pace with me, I was doing maybe 60 mph.

In the few seconds it took me to spin up my senses, I truly thought "Oh fuck me, this is IT. There really are aliens from other planets checking out earth".

Something something Star Wars.

My mate took his girlfriend down to a beach in Cornwall one evening, for the usual teenage holding-hands-and-hoping-it-ends-in-a-shag shenanigans.
She'd never seen a shooting star, so he promised he'd find her one.

So the lay down, looking up at the stars together.

He said a white glow, about the size and shape of a 5p piece held at arms length, passed slowly across the sky.

There's this bloke on the internet right,
Who reckons he's an alien and posts really fucking tedious essays about it.
(Graham Coxon out of Blur, Thu 1 May 2014, 15:33, 2 replies)

It was a weather balloon. That's all.
Nothing to see here Earthlings folks, move along.
(

'Doctor Doctor' is my favourite one.

First!
Should write a story, I guess. Yes, I have seen a UFO. It took the form a light moving at high speed, and suddenly changing direction and spiraling and shit over Lyme bay, then a couple of fighter jets approached from the the direction of Weymouth, and the light shot off in the direction of France so quickly it looked like a shooting star.

I have absolutely no idea what it could have been.
(