On a school trip, a boy in my brother's class crapped himself down a Dutch mine, writes Richard mcbeef off the Internet. The teachers tried to blame the smell on sulphur but the truth came out when they left the mine, as the boy was wearing chinos with massive dark brown streaks running down the back of his legs.

Do you have a funny story of your own?

My old colleague Brian
was afflicted with an extremely windy digestive system. One Saturday morning as he lay in bed, he felt his guts churn in that way that indicates a particularly satisfying fart is brewing, especially when one has eaten a massive curry the night before. And so it was, giggling to himself as he did, that he drew his knees up to his chest and prepared to let rip.

And let rip he did, followed immediately by an arcing stream of hot molten shit which proceeded to splatter the marital bed, covering the duvet, the bottom sheet, and pretty much liquidising his boxers in the process. Thankfully, his missus was in the bathroom at the time, and so well placed to bring him the bog roll. I say "bring", what she actually did was throw the packet at his head, call him a disgusting, filthy animal,and storm off to her parents for a bit until she felt it was safe to come home.

Brian told us about this the next day when we were doing an overtime shift.

I haven't seen Brian for a while, but he did turn up recently in an episode of Robson Green's Tales of Northumberland, building a fishing coble in Amble. He looked happy.
( 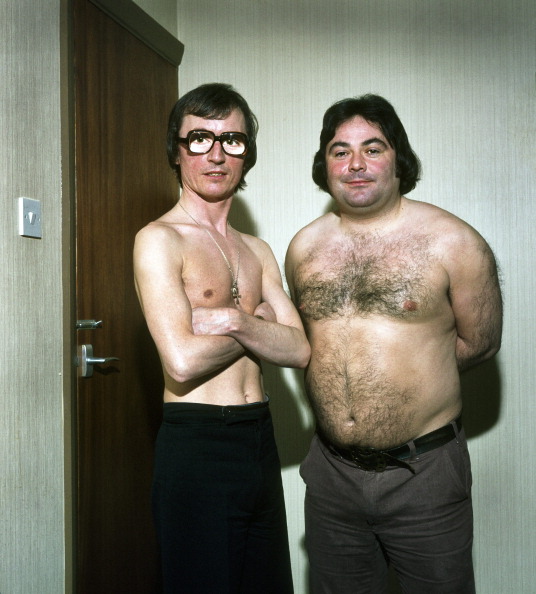 school hardnut
Once the school hardnut (and he was rock solid) came up to me in the sports hall when it was only me and him there, and threatened to break my legs if I was lying to him...

...the background? I was good friends with his girlfriend, who along with her mates had been mucking around showing off cleavage in a maths lesson. It would have been impossible not to see. One of my apparent mates went and told him I was staring at her tits.

I don't think they have to be stories about shitting yourself.

running
Once when I was running I had a bad stomach and I had to stop and have a shit in the grounds of a pub that was right by the main road. I was 400 yards from home..

Who would win in a fight out of Gordy and Babe?

having one off the wrist
Lad I worked with in Royal Mail once admitted to us that he had, for a long time, been under the impression that 'having one off the wrist' was slang for going for a pint (no explanation was ever given for this misunderstanding). He went on to document several instances in which he'd asked friends if they wanted to go for a 'quick one off the wrist' with him, and a subsequent time when someone asked him if he'd ever been caught by him mum doing the same, which caused him much confusion
(r0bm867, Thu 18 Jun 2015, 15:48, 4 replies)

I shit myself outside M&S on Oxford St when I was 23.
I went in and bought new pants, socks and jeans. Then got changed/cleaned up in the gents of The Tottenham on Oxford Street leaving my shitty clothing in the cubicle.

About half an hour later the barman came out of the toilets exclaiming that I wouldn't believe what some dirty bastard had done to his toilets.
(Set your faces to Stunned Bigly, Thu 18 Jun 2015, 15:47, 6 replies)

Who would win in a fight out of Dante's Peak and Volcano?

Richard mcbeef off the internet wore chinos to his school trips.

I once got caught having one off the wrist by the window cleaner.

Who would win in a fight out of Antz and Bug's Life?

I wonder if Richard mcbeef from the internet
Is able to confirm if this boy Dutch ovened the Dutch mine before passing his Dutchie?
(

I sold this Makita cordless power drill in the local paper, and then 6 months later I received the very same one back as a Christmas present from my brother-in-law, minus the power pack.
(eViLegion has had enough of this bullshit, Thu 18 Jun 2015, 12:48, 5 replies)

This weeks theme is "funny stories". All bases covered there.
Apart from the weepies of course
(