B3tans! Can you hum with your tongue? (Your Ginger Fuhrer can and he once demonstrated this to a producer on Blockbusters on the hope of getting on TV) Maybe you can bend your thumb in a really horrid way that makes it look broken. (Your Ginger Fuhrer's other special talent) What can you do? Extra points if you fancy demonstrating this with the odd pic or youtube vid.

Skipping
This is the most ridiculous talent and I don't know where it came from.

On a sports day in school the kid doing the skipping race felt ill so the teacher plucked me out of the bunch of kids attempting to hide and demanded I take his place. I won.

I was then entered into the regional competition against my will, tripped over at the start and still won. I was given some comical medal for my achievement.

It's the most embarrassing and useless talent. Some girl described one of my performances as 'the most naturally gifted skipper I've ever seen!'.

This shit is not on my cv. Why couldn't I actually be good at something that I could win an Olympic medal for as opposed to a wedgie?

n.b. I couldn't resist entering the parent's skipping race at my nephew's sports day. I've still got it.
(

I have one
no matter how hard I try, I can never come up with an amusing anecdote for qotw, or anything interesting to say at all.
(

Using a vacuum cleaner
and a bit of 50mm bore pipe I can make myself ejaculate in under 20 seconds.

Streetlights
Turn off when I walk by. I know, I'm just one of those paranoid weirdos like I'm sure you have seen on the interwebs, but it does happen with a freakishly high frequency.

Is there a rational explanation yet? Just a bit of loose wiring under the pavement maybe?
(Galahad is out of his gourd on yellow bentines, Thu 18 Nov 2010, 15:26, 13 replies)

belly button
everyone has one but i've never found anyone who can do with theirs what i can do with mine. I can turn it inside out so it is like a pregnant ladies ''snooze'' button, and if you poke it back in it will suction onto your finger.

I can use a cigerrette light, not only to open bottles of beer
but to launch the bottle caps a fair distance (up to 10 meters)

I have launched them across rooms and roads. My accuracy is crap though, I can get a general direction but that's about it.
(

Clicky Jaw
Dunno how I discovered it, but I have the ability to click my jaw at will and create tunes with it...

Current favourites are the super mario theme tune and and willam tell tune :)

Autofellatio
No, I can't do it, but read on.

Several years back, I stopped by a party late one night, around the time people were snorting coke (not something I partake in). One of the guys there was well known for claiming he can put his own penis in his mouth. Everyone demanded a demonstration.

The guy was no stranger to showing off this fact. One time at our favourite dive bar, he snuck into the women's washroom, pushed one of our female friends into a stall and locked himself in too, and started fellating himself in front of her. She was screaming and everyone else thought he was raping her, but, well...

Anyway, he finally relented, but he said due to shyness reasons he'd only do it in another room with three people present. It didn't matter that one of the people would have a video camera.

I somehow made it in for this demonstration. I can't remember what my reasoning was for wanting to go along, but I think I'd probably have made the same choice again today.

We went into the unfinished basement laundry room. He was, uh, high on coke, so he couldn't really get it up. He ended up having to stretch it out so it would meet his mouth. It was an insane feat of flexibility mainly in the upper back region that I thought only my cat capable of.

It was not very nice to see, somewhat resembling a man eating a limp piece of bacon out of his fly. I didn't like what I saw, so I turned around and smashed my head through the nearest drywall, creating a not insignificant hole.

For months after, people would come up to me and say "Hey Race, I saw the video. You were amazing!" Never mind the guy autofellating himself, we all want to see Racetraitor putting his head through a wall.

My spinally gifted friend at another point told me that autofellatio is great; no cleanup afterward. Later, he had a brief relationship with my sister, and then tried to become a Buddhist monk. Last I heard, he was telling people seriously that he's a time-travelling Nazi from the past.
(racetraitor has an alibi for, Thu 18 Nov 2010, 15:05, 10 replies)

When I still had my piano
I could play through the first page of La Campanella by Liszt, but I'm out of practice.

I can still hit the chord Cdim +11 with both hands (although different inversions, I'm not Rachmaninov)
(

I can do an impersonation of Arnold Schwartznegger so accurately it's uncanny:
"I'll be back."
(

Oooh, forgot about my real talents
1) I can measure butter by sight 100% accurately every time to the gram/ounce (only butter mind, nothing else!!)

2) I seem to have the knack for picking the perfect presents, not since I started buying/making things when I was a nipper have I ever failed to be hit by a moment of inspiration for someone. Hence I end up helping others with their present buying or their kids/partners/in-laws etc. I should charge commission.

That's it though, for everything else I am a bit shit.
( 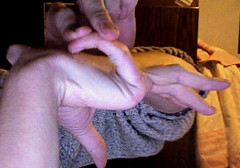 Discovered one day when I was very very bored.
(

Eh, I dunno if it's particularly unusual...
...but on Tuesday I sang with my band (from university) for the first time in 10 years. Young ladies took off items of clothing and threw them at me.

I have a few
- a sound similar to the squeaky horn of a clown car
- something I can only describe as a demented eagle
- my left wrist makes a nasty craking noise
- and the ability to burp on command.

I also have the ability to produce the most vile farts, of which I like to leave in my brothers room until he realises and comes and punches me on the arm (or does likewise in return). This is the brother who has double jointed fingers so he can bend the end of his finger but not using his knuckle. (al la upload.wikimedia.org/wikipedia/en/c/c8/Doublejointed.jpg)
(tb2571989 dies at precisely, Thu 18 Nov 2010, 14:44, Reply)

I have also been told
that I can suck the atmosphere out of any room....that was a compliment, wasn't it?
(

powerful ejaculation
There are dribblers, squirters and shooters. I am of the latter variety and seem to possess an exceptional power in my vesicles. If I lay on my back and choke the chicken, I'll shoot that pearly wad clear over my head and on to the wall behind, and I'm over six feet tall. I'd guess I can easily do a metre.*

Not something I have a picture of, but you should smell my pillow case.

*Turning one's head at the moment of release is key unless I want to facialise myself.**

I know a man...
Who is able to put people to sleep just by starting a conversation with them.
(

Voices
not of people but I am told I can reproduce fairly convincingly just about every animal you might find on a farmyard as well as dolphins, toucans, kangaroos, guanacos, a variety of household pets and if people are especially bored a wookie and a tie fighter from Star Wars.
(

My one and only talent...
...Taking a long lunch break and forgetting to change the Question of the Week.
(


Edit: May as well pea this for now:

I can walk on stilts, which I use to considerable effect in my Hallowe'en costume for the last few years:

My talent is coming third

Coming 1st is my special talent