I think it still has a bit to go. Like old photo style edging to make it look more real more tonal depth etc. But I'm going to New York tomorrow and the challenge will be over by the time I get back so this'll have to do. 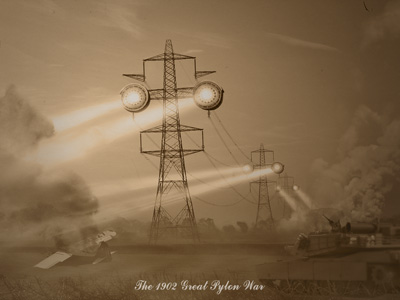 From the Pylons challenge. See all 274 entries (closed)

Very haunting, like a cross between WotW and The Iron Man.
Earns a click and a Huzzah!
Edit : They won.

just a quickie like... a bit more time and i could do a decenr enough job methinks :-)
(

this deserves to win so much


why did that crap picture win last weeks challenge?
(

because they are no longer judged by human beings

but simply ranked according to clicks from all the dribbling halfwits who browse b3ta but never post.

I don't think you could cajole anybody into juding the competitions properly these days - far too much crap, re-posts and repetition for it to be worth the bother
(

I am happy in the knowledge that I once judged a compo.

those were the days indeed.
(

I judged two, I think.

there were so many good entries and a fucking arrow on a picture one. stupid lurkers.

surely thats unfair on late entries? anything on the popular page gets an unfair avantage. at least tribs awesome picture is winning this weeks.
(

even the front page is shit lately, relative to other stuff on the board, especially in the night hours.

I mean how could this not have been front-paged

CLEARLY I HAVE MISSED MY TRUE CALLING AS A SPECIALTY PORNOGRAPHER
(

I'm on here more than enough to see most of the entries.

/failing degree due to b3ta
(

i think this is amazin

i like the variations offered up by others, too.
(