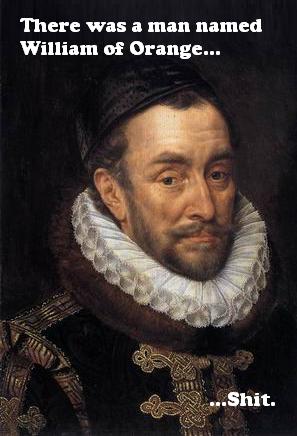 From the Limericks challenge. See all 147 entries (closed)

Who went on a big drinking binge

FFS it's not that difficult
(

Depends how you pronounce orange

Being from the Midlands I veer towards "o-rinj" (which would rhyme with minge) whereas my Canadian missus pronounces it as one syllable: "ornj"

She also pronounces squirrel as one syllable: "squirl"
(

Reminds me of Eddie Izzard

(doing a gig in America) "there are lots of subtle differences between British and American English. You say "sidewalk" we say "pavement", you say "erbal" we say "herbal". Because there's a fucking H in it.
(

It's somewhere between you and your missus, 2 syllables but with some sort of indeterminable vowel where you have an 'i'
(

It's a half rhyme in this case cos it only rhymes with the second syllable.

Because the maiden is the last person mentioned,
it sounds like she spent all night poking her own minge.
Or was that deliberate?
(

Nah, read the last three lines together and it works

Firstly I never met this William of Orange

and secondly I take issue with people implying I poke anything let alone my minge!
*Huffs*
(

Sorry, but I disagree.

Notwithstanding the 'He met..' line,
after the young maiden is introduced there folows what appears to be an account of what she did:
who gave him a hard-on and spent all night poking her minge
(

So what you're saying is that -

"Which gave him a hard-on"

rather than "Who gave him a hard-on"

would make it correct?

I hadn't thought of that,

but it would be an elegant solution.
Good work!
(

...who was inordinately fond of the minge

You could attempt 'syringe'.
(

Reminds me of my favourite Haiku:

...Who claimed nothing sounded like "orange".
Disproving it went he
To Abergavenny
And discovered the mountain named Blorenge
(

There was a man named William of Orange
Who trapped his pork sword in a door hinge
No more could he fap
The sad worm in his lap
Or diddle it round in much more minge
(Vice Admiral Sir Charles Cockbrush KCB MBE DSO, who is finding it increasingly difficult to log into b3ta.com wants to duck your aunt and kick your puppy, Fri 3 Sep 2010, 18:42, archived)