"Let's get all the fireworks and pile dog shit on top of them". I can't believe I actually said that, and I still can't believe I was the one who lit them and couldn't run away in time. Tell us about your spectacularly misjudged ideas. "So," she said, "either we have kids or I want Springer Spaniels".
I chose kids.
(

Dragging the B3ta QOTW feature out for this long
Here's the number of posts for the previous 532 topics since Dec 2003. Notice a trend? Scrap it ffs. There are some old timers on here including myself who think it should've been switched off after FrankSpencer stopped posting rather than turning it into the internet's answer to Last of the Summer Wine. 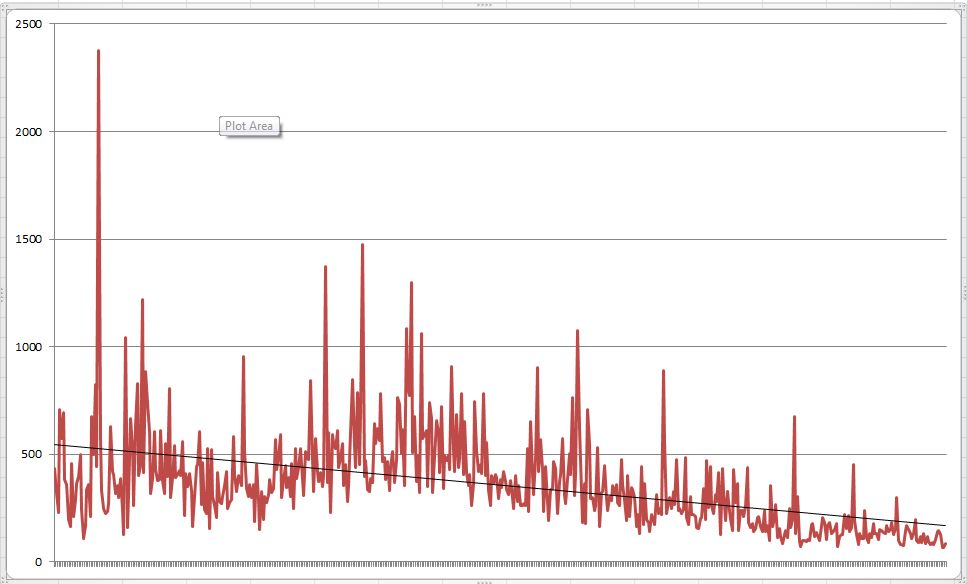 Letting Ridley Scott do Prometheus. Never have so many people been employed to write
interesting points of view regarding the fact that - you did not get it. Oh, I got it alright. It was shit.
(

RT: This will make your eyes water.
My wife was in the garden and had got some dust or grit in her eye, so she sat down in the chair in the living room and sent me upstairs for the Optrex.

No problem, I went to the cabinet, grabbed the distinctive little blue and white dropper bottle and went downstairs. She tilted her head back and I proceeded to drip the soothing fluid into her eye. It didn't seem to be working very well.

At this point, I ran back upstairs, found the real Optrex, used most of the bottle flushing her eye out, told her the amusing mistake and then ran away and hid.

Amazingly, all parts of my body are still intact, although it was a close run thing.
(

RT: Another pyromaniac chemical adventure
When I was about 12, we went to visit one of my Dad's friends, who was a research chemist. He had loads of good surplus chemical stuff.

Bored with the purple smoke from magnesium shavings + iodine crystals, his son and I decided to try to make gun cotton. This didn't work and we just ended up with messy, glutinous, carbonized crap all covered in concentrated acid.

So, what to do with this stuff?

My friend came up with the obvious answer (I'm sure you have, too): make a standard sugar+nitrate mixture, add some magnesium shavings, stick the acid napalm on top, light it, put a tin can over the top (open end down) and stand on it. OK, says I. The parents are out shopping, let's do it. So he does.

Cue an hour of alternately trying to alleviate hot acid burns by dunking his face in a sink of cold water, and combing the burned clumps of hair out. Once the parents returned, this was inevitably followed by a trip to casualty, while my mum gives me the standard "How can you be so *stupid*" lecture at volume 11 for another full hour.

No permanent damage though, but it was bloody lucky he wore glasses.

Following Cptn Crackerjack's 'things not to do next to your eyeballs'
When I was young I was confused as to how those little pearl-like bath bombs worked so I looked really closely at one while squeezing it. BANG. Soap, both eyes, point blank range. Well done me.

I've also put my finger under the end of a stapler and pressed down on it 'to check the staples were coming out'.
(

Farting into a mug and then sniffing the contents
As bad an ideas as it is, everyone who has never tried it will now feel compelled to.
(

Testing a scientific hypothesis
I had a theory that setting off a camera flash directly into your eye from a couple of millimetres away would cause permanent blindness. I decided to try this, and thankfully I was wrong; it cause incredible pain and temporary blindness.
(

Growing up
Crap idea, still I've found enough booze enables me to regress comfortably back the noisy dribbling mess I started out as.
(

advertising PACT coffee on your site

Using eBay while drunk
I have made a number of purchases which reside in the 'seemed like a good idea at the time' category.

Mainly with the subtitle 'dispatched free post from mainland china'.

Zen and the art of internet flouncing

Responding to your mothers sexual advances
her nob is twice the girth of mine. Was an entirely shameful experience
(Moag_R_Brainbow kicks the mods dog to death out of pity, Thu 24 Jul 2014, 14:14, 7 replies)

My laptop stoppoed working
So I took it to PCworld to get it repaired.

The rest is history

Selling my flat
Bought for 44k.
Decided to sell it in late 1999 for 54k as "Surely it can't keep going up in price for much longer and I'll cash in on ten grand".

saying 6th
when I was actually 7th
(

Pretending to be a cripple
and getting in one of the wheelchairs in the door way of a marks and spencers superstore, only to have a member of staff offer to help push me around the store for about 45 minutes.
(

has anyone said B3ta yet

the reply button on qftw

Worst idea ever
Don't worry I'll pull out, followed by lets get married.
(