Attending a wedding is like being handed a licence to act like a twat. Oh how I laughed when I sobered up and realised I'd nicked most of the plates and cutlery from the posh hotel lunch and those vague memories of stealthily exiting like a cat-burglar had in fact involved falling out of the hotel, knives and forks clattering onto the steps.

Tell us more of your wedding stories.

If scaryduck hadn't been banged up we might actually get a new question once in a while.
I think on balance everyones kids are safer this way though.
(Mr Udagawa, Thu 20 Nov 2014, 19:00, 3 replies)

Got fact, so defrag thy uric kink, hick!

Is now the appropriate time to get my bum out? 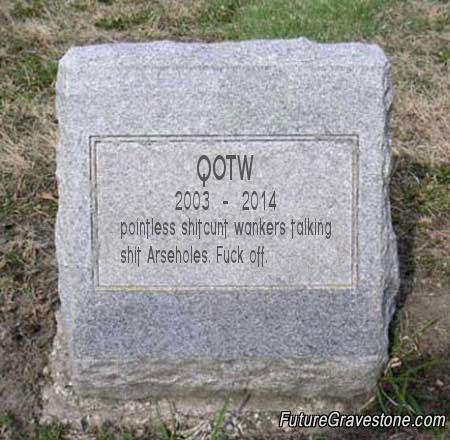 I'd just like to say that I was here the day that Qotw was finally abandoned.

"Ow much did she charge you?" quipped Cleggy.
"Fiver," replied Compo.
"Bollocks. I had full penetration off her for forty quid," fumed Cleggy.
"Aye, but she only tossed me salad," remarked Compo.
"By'eck," uttered Cleggy. "Come on, I get us a round in," he added.
"I got to brush my teeth first," replied Compo. "I had to toss her salad as well," he added.
Cleggy broke his gaze from Compo and slowly walked away shaking his head in disbelief.
(

Living in Redditch for a brief period
these were inevitable.

Wedding number 1. I was an onlooker as the "reception" was basically taking place in my local. Teenage groom, bride in her forties, I swear her (school age) children had tattoos, words were obviously exchanged at some point between the two families, it all kicked off. A guy I vaguely knew looked down (we were on the balcony) at the chaos. "Yossers" he said, quite rightly, he was later convicted of murdering his wife with a sawn-off.

wedding number 2. I worked with both M (female) and her bloke D, M was a bright young lady with great norks, D worked in the packing department, a complete piss-head who'd always miss at least one day a month due to drinking, in the mornings you could smell the cider on his breath. Everyone knew M could do better for herself, but she'd been going out with D since the year dot and probably thought she could improve him. Wrong.

At the wedding, D was obviously pissed, towards the end of the evening he came up to me. "You've always fancied M, haven't you?" he slurred. I did my best to make a non-committal comment, in case I was going to get a beating, yes I often wondered what those norks looked like, but had never taken it further.

"Well, I tell you what" D continued, "why don't you take her home and fuck her tonight, I've got my eye on the bridesmaid."

Tempting though this was, I declined. The marriage lasted six months, several years later D was hit by a car and killed as he staggered home from the pub.

this place is dead on it is arse

The limo we got from the chapel to the breakfast was a stretch Humvee. It had a dancefloor, and a pole, in case we passed any groups of feral, stripping midgets we fancied picking up, and was pumping out the latest tunes on a massive speaker system ...
with accompanying TVs all over the shop.

I'm pretty sure the whole thing was powered entirely by the tears of starving third world children.

I'm dreaming, of a new question,
just like ones I used to know...
(

Wedding etiquette
I was a bit miffed not to be invited to a mate's wedding.

Then I remembered that I'd slept with both his wife-to-be AND his sister*, so reckoned he was probably right.

Mind you, I could probably have done quite a fun speech - it could have been titled "Compare and Contrast"... They could have had a sweepstake to see how far I got before being attacked by his family!

Congratulations.
This wedding thread has now outlasted most marriages.
(