Who would you like to have sex with who isn't probably top of everyone's list and why?

Alex Polizzi
The Hotel Inspector on Channel 5. Good pair of knockers and would love her to boss me around.
(Headsbollockskuntz, Tue 11 Oct 2011, 14:45, Reply)

Hugh Lennon (is not my crush)
Hugh Lennon later became vaguely well known for Hypno-Dog, but back in 1992 he was just a jobbing hypnotist doing the Student Union Bar rounds. If I recall, his show was free as part of my Fresher's Week (along with a ticket for The Pogues featuring Joe Strummer, brilliantly) which is why I ended up watching. I watched my heavy metal freak new flatmate prove that he knew all the words to 'Bad' along with most of the dance moves. In fact, being a skinny, weird looking white bloke dressed head to toe in black, he looked uncannily like the real thing. I watched a girl I don't know eat an onion like it was an apple and a couple of guys get electric shocks everytime they sat on their chairs. And then I watched Mai, the Malaysian Medical Student, as he was taken to the front of a stage, put in his trance and told he was in a room and no one else could see him and to describe his surroundings. What followed, while hilarious to me at the time, is what has left me with a lifelong distaste for stage hypnotism, because it's fucking cruel. Mai described a bedroom, described being tied down on a bed. Hugh Lennon said something like 'Your ideal woman has just walked in, can you tell us who is there with you?'. And we laughed, cruelly and spitefully when he answered 'Virginia Bottomly'.

I think that would have been hard enough to live down as the first impression you make on 250 of your fellow fresher's. But Hugh wasn't done with the nastiness, not by a long shot.

'And what is (snigger) Virginia Bottomly doing?'

'She's pushing a broom handle up my bum'.

Dancebiscuits reminds me,
does Queenie in Blackadder 2 count? Or is that not particularly iffy? Especially to a 13 year old?
(

Christ! -This Shows My Age

First crush was Suzi Quatro - a girl who played guitar and head-banged.

Felicity Kendall. Men of a certain age were smitten by her elfin charms. No tits though.

Jenny Agutter - probably because, and correct me if I'm wrong, the only two films she appeared in where she didn't get her tits out, were the original Railway Children (where she was about ten) and the remake (where she played the mother)...

Duchess
From the 'Aristocats', very feline, loved the accent.


And you know she's dirty because she's got three kittens - not much more than a couple of months old - and she's already flirting like mad with some Tom she's only just met. A real prick tease, but classy with it!

And you know she'd be really noisy too.

After seeing JoBeth Williams' shrouded mound at the tender age of 11,
it left a funny tingly feeling in my goolies for quite a while

this dates my childhood
but when I was about 10, I always fancied some group love with Blackadder (Georgian era), the male cast of Red Dwarf and most of Maid Marian's Merry Men. When Robin Hood later appeared on a Campino advert, I went off him but now IMDB tells me he was in Bloodsport with Jean-Claude Van Damme. Blimey.

I know there would be no chance at all
because of her being all lezzy and that, but Sue Perkins off of the telly is in my top 10 list of women over all, rather than just suspect crushes.
(

Mary Poppins
I always thought Julie Andrews must have been a dirty cow in this movie - I imagine a lovely hairy cleft up her skirt - but then, all those dirty sweeps going up her chimney first?
(MonkeySandwich eats a kitten, leaves a chair, Tue 11 Oct 2011, 12:30, Reply)

Also, I always hated that posh and scrawny wine expert woman, Jilly Goulden. Ugh! But then one night i had her in a dream and now it's different. Except she's never on telly any more!
And did I mention Ann Reid? (I'm beginning to compile a bit of a list here.) Her of Coronation Street (the black and white years) and 'Dinner Ladies.' Quality.
(fergus the bogeyman Beware of geeks bearing gifs!, Tue 11 Oct 2011, 12:21, 5 replies) 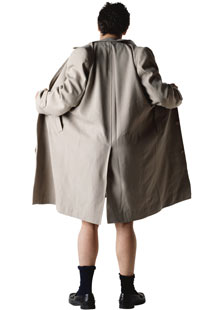 Dr Shambolic
I just want to grab those sideburns of his and lose myself in them.

MmmmmMichael Palin
In the fine wine and cheese way I think he gets finer and finer. For some reason he doesn't cause the same degree of carwash brush foaming downstairs in his early Monty Python days as he does in his later twinkly travelogue days. Hmmmm. Excuse me just a minute need to find a mop...

On the subject of childrens shows....
Dunno if mentioned before, but Edie Mcridie off of 'Balamory' has a certain something about her, probably a bit past it now but she still looks dirty. Juliet Cadzow she is called apparently, was in the Whicker Man.
(robneymcplum spiced up his life on, Tue 11 Oct 2011, 8:43, 6 replies)

The lass
from 'Dead Like Me'. I've not googled, so I've no idea if I'm in a minority or going with the flow!
(

Not classically beautiful but have something
1. Kim Deal, preferably about 1988. Even better if her sister joins in.

sarah jane smith
The lady from Dr Who, since passed away, Miss Hooley, from Balamorey, but most importantly, Barbara Flynn, to the music of Bix Beiderbecke. One of his longer pieces.
(lordy lordy, Tue 11 Oct 2011, 7:52, 3 replies)

But I know it's just a mad, crazy dream.

Nurse Gladys Emmanuel.
I would have fought Arkwright to the death for the rights to snuggle into them.
(

I just remembered!
My ex wife told me once that, since she was young, she had an uncontrollable attraction to Noel Edmonds. She was, however, so young when she first fell hopelessly in love with him that she was unable to pronounce "Noel", so she called him "Noodle" instead, but the little crush had remained with her throughout her life. She told me this in the days of "Noel's House Party". I feel loads better about my penchant for Jennifer Tilly now. Noel bloody Edmonds.
(

Her off Star Trek: Voyager.
Not Janeway. Not even Seven of Nine. No, B'elanna Torres. I'd gladly fuck the Cornish pasty right off her head.

One that got me some serious odd looks off my housemate
And he's a gay.

Annie
From Thomas the Tank Engine

The Other One Off The Good Life
I've already seen someone saying Felicity Kendall, but she doesn't do it for me. Who wants Barbara being all aggravating and giggly, or whining at Tom about the goats? What I want is Margo being all posh and cross.

And him out of My Chemical Romance. Gerard Way. Dressed as Margo...