There's a pile of scrap timber, rubble and general turds in the road opposite my work with a hand-written sign reading "Free Shed". Tell us about random, completely hatstand stuff and people you've seen

One last one - and fuck you if it's not random - I think it was at least pretty fucking weird for all involved.
I used to go out with a girl who was an actress and artist. She invited me to one of the bits of performance art she was in (yes yes yes - she was a hippy chick, and hippy chicks are great), which was being held outside, in public.

She wouldn't tell me what it was about - only "Life, Death, and everything."

So off I go to see it. There they all are, waiting. There's quite a crowd of people waiting for it to start.

Suddenly, an older guy next to me starts plapping his lips, going a bit pale, looking terribly unwell now, and then hits the deck, clutching his chest - "FUCK!" I cry, dropping to my knees to check he's alright, "FUCK!" he's twitching and convulsing, "has anyone got a mobile 'phone?!" I ask shit shit this is not good this is not good "Anyone?!" the audience are just staring at me like so many stunned cattle "ANYONE?! ANYONE GOT A MOBILE 'PHONE THIS IS NOT GOOD!" I scream at them, "HAS ANYONE GOT A ... MOBILE ... shit .... shit ... "

I wish
just once Scaryducks QOTW suggestion choices were a bit more random.
(

Trainers
Just innocently walking down the road to my local co-op to get some lunch and minding my own buisness when hanging aon the metal barrier next to the road is a pair of trainers neatly tied onto the rails!!!!!!! Id love to know the story of that hehe
(Nahla, Thu 28 Apr 2011, 13:20, Reply)

Dalek
Once, a good few years ago now whilst on a coach going to Norwich, as we travelled through East London I glanced up from the book I was reading, looked out of the window, and there was a Dalek!

We were going quite fast at the time I remember and I craned my head backwards to look again, and there it still was receeding into the distance. I remember it was a black one with silver bits, It was at the foot of a flight of stone steps leading up to a large building. There was no one in attendance, no body around at all. I whipped my headphones off and looked around at my fellow passengers, no one seemed to have noticed at all, so I turned to the bloke next to me and said "Did you just see that Dalek?". He just looked at me and shook his head No.

My Son's Dream
About 18 months ago my son woke me about 3 in the morning, sobbing uncontrollably. It took me the best part of half-an-hour to calm him down, reassure him that everything was alright and ease him back to sleep.

It turned out he’d had a bad dream. In this dream it had rained heavily. The rain had washed the lines in the road away. Because of this, a man was sent out to repaint the lines. Seems plausible. But the reason for my son’s distress was that in the dream someone stole the man’s drink.

I like shouting at cyclists as they jump red lights.
My aim is to make one crash.
(

Seriously? That's the most common query? I guess (hope!) it must be a meme that passed me by.

It's gone down in popularity since then. Strawberries have got so expensive, of course.
(moon monkey is busy making memories worth repressing, Thu 28 Apr 2011, 11:17, 3 replies)

Newcastle Shoe Tree
At Armstrong Park... Much better then student types throwing them round telephone wires. There's a whole bloody treeful. Quite a wonder to behold.

Yesterday I caught the tube with my housemate's doppelgänger
I saw him waiting on the platform and went over to talk to him. I'd literally got as far as the "H" in "Hey" before I got a close look at him and realised it wasn't my housemate, but to a casual observer the two people would be identical. Apparently this happens to him a lot, so maybe he's got a really common face and build or something.
(

Random for him
Driving out the end of my street last night on my way to play football, I spotted a good mate out for a jog in the sunshine. As I drove past him, I lowered the window and bellowed out 'Pick that fucking speed up you lazy CUNT!' and drove off chuckling.

Chuckles which died immediately as I observed a complete stranger in my rear view mirror - some poor bastard out for a spot of exercise had been given totally random abuse from a passing vehicle.

Too embarrassed to go back and apologise, I did the decent thing and floored it out of sight. If you are a recently-insulted Bournemouth jogger, then I apologise :-(
(Bappage, Thu 28 Apr 2011, 9:27, Reply)

Onlookers are...
From the Tap and Tin pub in lovely Medway

Bored (and probably a little drunk) one day
I sent a text to most of the people in my contact list:

Whilst queueing for Air at Alton Towers
Overheard a chap say to his mates, "Why do only humans go on roller coasters... I mean, why not cows?"
(Captain Skippy pooed in a bag and left it on your doorstep, Thu 28 Apr 2011, 6:51, Reply)

Not quite Banksy
A new piece of black, spray-painted "street-art" has appeared on a wall close to where I live.

It says, quite simply "Graffiti".

I'm not sure if the person responsible is either very witty or very stupid. I'll endeavour to take a photo next time I'm passing that way.
(SpongeGavShitPants, Thu 28 Apr 2011, 1:14, Reply)

"A study on the effects of precipitation and other environmental conditions on a cotton and synthetic fabric construction over a period of time"
Just out of Euston Station are a number of blocks of flats. On one of these there are blue(ish) metal balconies overlooking the railway lines and the adjacent buildings.

One day, a large soft-toy Homer Simpson appeared, hanging over the side of top floor balcony. Over the period of a year it became dirtier, saggier and rotten as it braved sun, wind, rain, sleet and snow until it was barely recognizable, then it just disappeared.

Whether he fell to his doom, he went in the bin, or late one night a heavenly choir of angels descended and carefully lifted him to his salvation and eternal rest, I shall never know, but all the same it was quite random...
(

I just received a text.
It says: Order a curry!

I moved to Copenhagen a couple of years ago.
And its choc full of randomness...

Here are some examples of stuff I caught around town...

With the recent BBQ summer
heatwave in blighty I ended up outside reading a book. Sat under the shade of a tree I was reading away when suddenly I noticed a little kid had wandered over and was now stood in front of me. I looked up, she smiled and said "have a nice day", handed me a daisy and then toodled off back to her parents.
(Sadarse works like Mist condensing mud flaps, Wed 27 Apr 2011, 18:35, Reply)

This is about as randomly odd as a statue can get.
I would appreciate it if someone could explain this to me. (Here is another view.) (NSFW for a naked male statue.)

I think I would title this "Ode To Parenthood".
(

I ate moonrock once
(Which has to be the ultimate winner for any "what's the weirdest thing you've ever eaten" competition, surely?)

I had a small fragment of (meteoric) moonrock, which I have had mounted in a ring. But there was a lump on one side which the jeweller shaved off, to give a neater result. It was too small to display or do anything constructive with -- so, on a random whim, I ate it.

Anyone in and around Eccles in Greater manchester have a good look for Elvis
Oh yes, Elvis is alive and well in Eccles.

You will find him on the 3rd or 4th balcony of the flats just off the roundabout at the West One retail park: 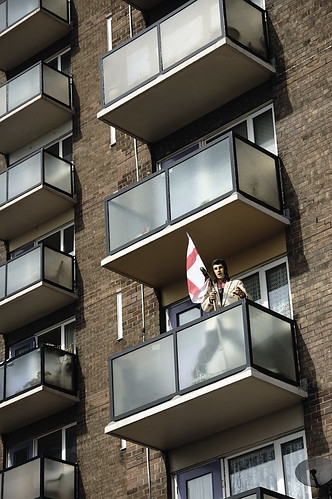 Always makes me smile on my way home from work.
(

Me and a few other mates were
Staying over night at a friend's house in a tiny village. This house was quite large and was surrounded by farm buildings, but wasn't actually a farmhouse itself. Now one of the farm buildings, some stables, were used to store lots of reclaimed architecture - doors, windows, old bricks, slate tiles and so on.

Anyway, late that night, about 1am I reckon, the door handle fell off the back door when somebody let it slam in the wind. So, my mate Steve, armed with an old screwdriver, grabbed his bike, and pedalled the 100 yards down the driveway to the stables in order to swap the door handle for a working one.

We heard a distant yelp and a clatter. And a few minutes later, he came walking back, limping with a small tear in his jeans. What had transpired was that as he got off his bike, he put on his bike light to see what he was doing. However, when he switched the light on, this must have spooked an owl because it swooped down at him, startling him and causing him to stagger backwards and fall over his bike, stabbing himself in the leg in the process.

After picking himself up, he carried on sorting out the door handle, the set off back to the house only to find he had gotten a puncture somewhere. He also managed to tread in some catshit, which was rather odd because they didn't have a cat at the house.
(