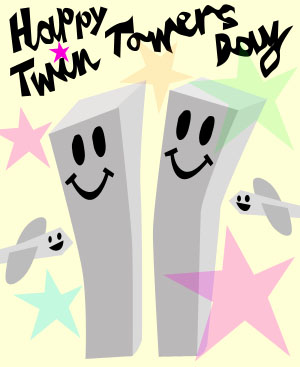 calling it twin towers day solves all those problems
(

at least our british suicide bombers had the good sense & decency to do it on a day with the same number as the month, to avoid confusion
(

I can just imagine them sitting around thinking how to minimise the fuss surrounding their terrorist plans...
(TheHorseWithSteelFrame Self-referencing comment in the third person, Thu 11 Sep 2008, 11:51, archived)

sorry, was outside getting rained on.

THIS SO HARD IT PROLAPSES

coincidence? i don't think so.
(

It's ok, I just celebrate it in November instead.
(

How about this for a conspiracy theory?

Much along the lines of "Plum Center" and the like, I have a sneaking suspition that the Americans deliberately engineering 11/9/2001 merely in order to be able to refer to a significant event in the American date formatting - thus spreading their influence further in the world.

*spreads around the internet*

Everyone should see this
(

morning. god they were all so happy about the collision

also. blimey, a compo where i can pearoast without it even being shoehorned.
i'll just drop this here: 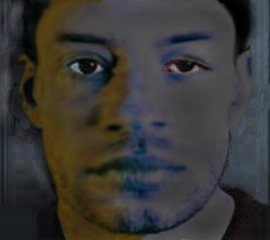 and run away and get back to work
(

btw, what's so special about 9th of November, I keep hearing everyone going on about it?
(

Ides of March I reckon
(

Someone send this to the Daily Mail, stat!
(

Happy never forget what day it is day
(

This is Internet Gold baby !! haha! i remember the first time you posted this (or it was one just like it)

what an uproar! "too soon!"

This is so many kinds of win

Aww, the planes look so happy!
(

Of course we get cake!

This makes me all warm and fuzzy inside
(

i have a callendar on my desk at work. one of those tear-off-a-page-a-day ones.
It had a big 11 on it today so i drew a plane crashing into one and smoke coming out of the other.
(MrChimp previously Monsieur, Thu 11 Sep 2008, 18:27, archived)

Is this an inverse pop up card?

When you open it, the towers fall down instead of pop up?
(

I'd have to agree

I signed the petition against it here: snipurl.com/offended
(

I must second that motion.

Cool - is it one of those musical cards?

I have to be the Stiffly Stifferson/Yank and tell you that, despite making the front page, I dont find anything funny about what happened on September 11th. I lost over a dozen friends after having spent 2.5 years in Building One of the Trade Center. I left slightly less than a year before that tragedy.

Perhaps I am just an up-tight arsehole Yank, but frankly, I think it might be a tad too soon. Though, at least, in your own twisted way, you remembered the thousands of people that died this day.

My personal count begins with my previous receptionist Olabisi and my Secretary Kim. It moves on from there to friends, co-workers, buddies down the hall and a husband and wife duo that were scratching their way towards true financial independence, despite being born and raised in the roughest area of Harlem. I still have no idea what has become of their two lovely children.

Sorry to be a wet blanket...no, I am not sorry. Perhaps if You lost friends, co-workers and loved ones, you wouldn't be so quick to crack a joke.

Oh, and for the record, I also lost a friend in the Pentagon attack. Maybe you should do something on that one too.

To be honest I agree

But you have to see this for what it is; a very B3ta style memorial, as I can (almost) guarantee nobody on this site found the actual event funny or amusing in any way.

Go looking on youtube for the real 9/11 trolls; almost every 9/11 video has them in the comments section.
(

well, i can understand, but

given the umpteen years we had to put up with pictures of...

senior american politicians treating the terrorist leadership as honoured guests, instead of killing them and 90 innocent people in the vicinity, banging them up in guantanamo, or shipping them to other countries to be tortured

...maybe you can understand that we developed a thicker skin about this sort of thing
(

ARe you talking about "Saint Patrick's Day" Parades? That's more than a little bit of a stretch, wouldnt you say? I mean, celebrating Irish heritage is no crime. If some twisted bastards send money to support terrorism in the UK/Ireland, they are just as bad as the idiots in the USA who donate money to Hezbollah. however, equating a bunch of drunk Micks staggering through Manhattan or Boston is NOT a terrorist gathering...it's a bunch of drunk Irish and those-pretending-to-be Irish having a good time.

Equating that to a celebration of terrorists is a bit of a stretch.
(

And their political front, Sinn Fein, who until very recently were always warmly welcomed in America on St Paddy's day, despite it being a political front to a terrorist organisation.

Not to mention the money raised in America and sent to the IRA to fund the buying of weapons (or the outright shipping of weapons across the pond) to be used to kill and injure British civilians on the mainland who were not in any way related to the conflict.

I often find it ironic that a city which had supported terrorism for so long found itself the target of a terrorist attack, but then my Uncle was hit in the Baltic Exchange bombing.
(andywg, Sat 13 Sep 2008, 11:15, archived)

doing a bit of training...

Listen, I know that some of the people in those parades celebrating their 'Irishness' were bad people, but honestly, if you think that the annual Saint Patrick's Day Parade in NY, Boston, Washington, Savannah, Chicago...hell, just about ANY decent sized American City is all about supporting the IRA, you my friend are sadly mistaken.

Hell, 3/4 of the people IN those parades aren't even Irish. They are just people that enjoy a good, albeit drunken, time.

Using YOUR logic, perhaps we should put an end to ALL Parades! I mean, those Italian-Americans: GANGSTERS! Oh, and those African-American Parades: GANGSTAS! And while we are at it: what about those Puerto Rican Parades? Yep: Terrorists.

So, by using YOUR logic, let's paint ALL the Irish with the same tar brush. Brilliant.
(

perhaps you should delcare war on b3ta

or the internet maybe
(

well, given that on b3ta are stored

means of mass distraction (from capitalism) in very large quantities, I cannot see a reason against your suggestion
(

I for one welcome

At least when the terrorists blow stuff up they intended to.

Rather than all that friendly fire malarkey.

What does this have to do with anything?
(

I FUCKING LOVE YOU.